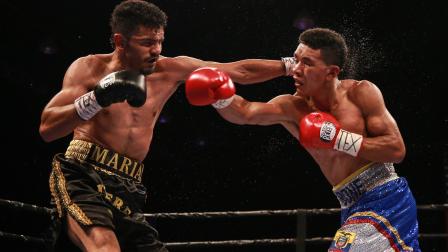 Vazquez vs Bone full fight: May 28, 2016 click here to get video transcript 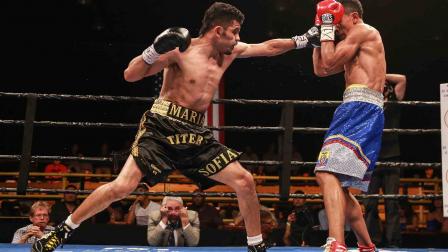 Vazquez vs Bone highlights: May 28, 2016 click here to get video transcript 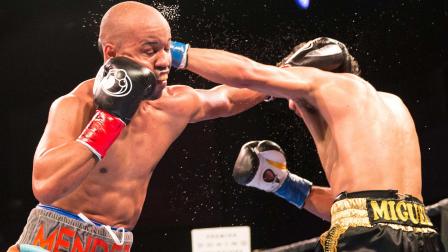 Vazquez goes on the offensive, wins unanimous decision over Bone

A step up in weight for Miguel Vazquez produced a revitalized attack for the former world champion—and a familiar result.

Miguel Vazquez has long eschewed the traditional blood-and-guts approach of his Mexican countrymen. So don’t expect the onetime 135-pound champion to all of a sudden turn into a power puncher just because he’s jumping up in weight for Saturday’s 144-pound clash with Erick Bone.

Erick Bone was chilling in New York early last March when he got the call: The second-ever Premier Boxing Champions card was taking place in 24 hours in Ontario, California, and a replacement opponent was needed for former 147-pound champ Shawn Porter.

Miguel Vazquez doesn’t favor the volume-punching attack employed by so many other Mexican fighters. Instead, the lanky Vazquez, nicknamed “El Titere” (The Puppet) for his ability to control opponents, uses his boxing skills to gain the upper hand, throwing punches from all angles and frustrating foes with his movement. It’s an approach that has made Vazquez one of the world’s top fighters at 135 pounds.

No shortcuts to success

Growing up in Guadalajara, Jalisco, Mexico, Vazquez was introduced to the sport early on by his father, a former professional boxer who trained his son into his early 20s.

Making his professional debut in January 2006, just two weeks after his 19th birthday, Vazquez was tested immediately when he faced future world champion Saul “Canelo” Alvarez, who already had two bouts under his belt at the age of 15. The fight was close, but Alvarez won a four-round split decision.

The loss didn’t deter Vazquez, who won 18 straight bouts in less than two years, sometimes fighting twice a month as he competed exclusively in Mexico.

In July 2007, Vazquez made his U.S. debut against another rising prospect who eventually became a world champion. Timothy Bradley, who entered the 140-pound fight with a record of 20-0, outboxed Vazquez over 10 rounds to take a wide unanimous decision and earn his first title shot.

Vazquez rebounded to win his next three bouts, setting up a rematch with Alvarez, who entered their June 2008 bout with a record of 19-0-1. Fighting at 147 pounds this time around, Alvarez again emerged victorious, earning a unanimous decision.

On top of the world

With a record of 21-3, Alvarez resumed his pursuit of a world championship as he dropped to 135 pounds. It proved to be a winning move, as he earned his first title shot after earning a 10-round split decision over Breidis Prescott in July 2009.

Fighting in Laredo, Texas, in August 2010, Alvarez won a unanimous decision over Ji-Hoon Kim by a wide margin to win a 135-pound world title.

Alvarez successfully defended his title six times over the next four years, also winning two nontitle bouts, as he cemented his status as the top boxer in the division.

Even though he failed to stop any of his opponents in his title defenses, he earned one-sided decisions in nearly all of them.

Both Ricardo Dominguez and Leonardo Zappavigna barely won a round against Vazquez in November 2010 and March 2011, respectively. Ammeth Diaz also barely avoided being shut out by Vazquez during their January 2012 bout.

Long reign comes to an end

After winning a tight split decision over Marvin Quintero in October 2012, Vazquez then outclassed Mercito Gesta in December 2012 to take a unanimous decision.

After more than a year of inactivity, Vazquez returned to defend his title again with a unanimous decision over Denis Shafikov in February 2014.

Seeking his seventh title defense, Vazquez met up with once-beaten Mickey Bey in Las Vegas in September 2014. The tactical fight produced few fireworks, but was close throughout.

Undaunted, Vazquez got back in the ring against Jerry Belmontes in Ontario, California, in March 2015, and cruised to a unanimous decision to push his record to 35-4.