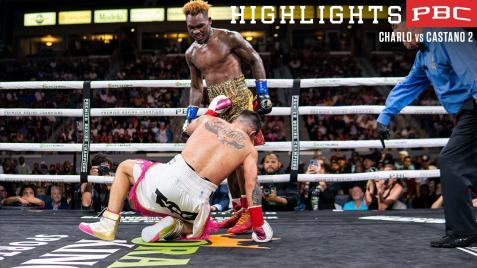 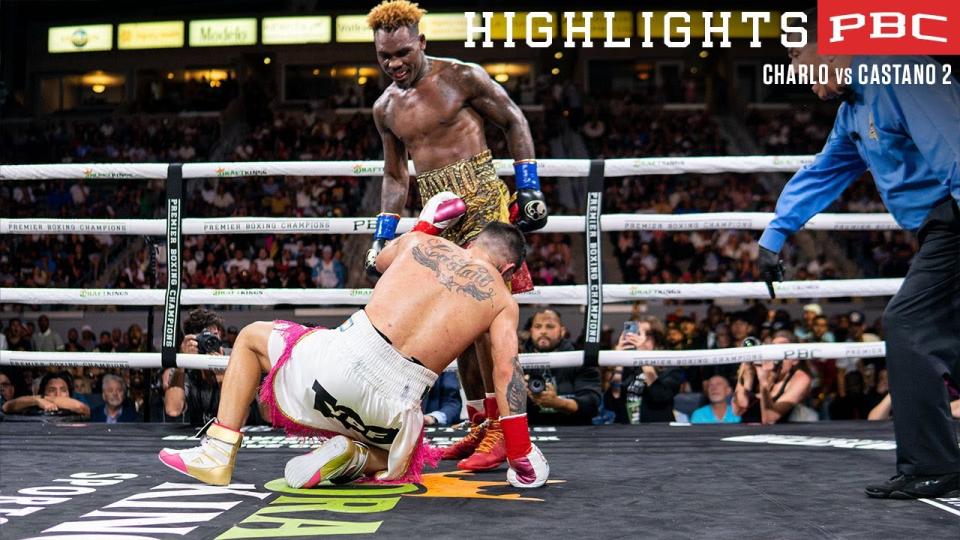 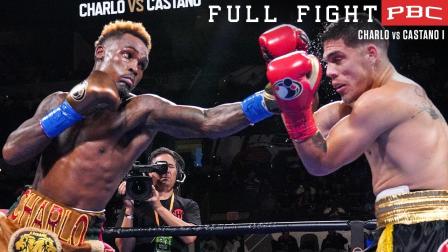 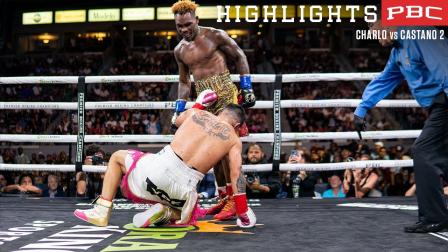 Charlo vs Castano 2 - Watch Fight Highlights | May 14, 2022 click here to get video transcript 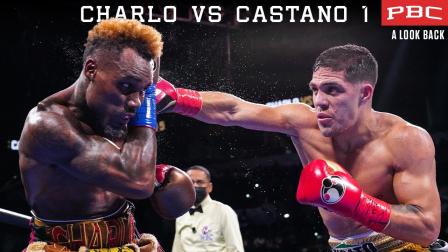 Charlo punches his ticket into the International Boxing Hall of Fame with a magnificent victory over Castaño to become the first ever undisputed 154-pound champion in the four belt era, capping off a thrilling night of action on PBC on SHOWTIME.

The most mouthwatering matchup of the year is here as Jermell Charlo and Brian Castaño meet again to crown an undisputed 154-pound world champion Saturday night on PBC on SHOWTIME.

The undefeated WBO Champ recalls his finest performances as he looks to add another Saturday night when he rematches WBA/WBC/IBF 154-pound Champ Jermell Charlo for the undisputed 154-pound crown, live on PBC on SHOWTIME.

Argentina's Brian Castano has already won a world title and already proven himself at the most elite level. The undefeated Castano is on a mission to become a two-time world champion in the talent-laden 154-pound division.

Brian Carlos Castano was about five years old when he began assisting his father, Carlos, a professional welterweight boxer and street sweeper, to remove debris and litter from the roads.

They lived in a Buenos Aires province named La Matanza or “The Slaughter,” a violent area wherein many youth perish due to the drug trade.

“I was ashamed at first to be seen sweeping streets,” said Castano, who also sold bottles of water on street corners before joining his father at a local boxing gym. “I used to cover my head with a jacket. In time, I became proud that I was helping my family.”

Castano also “grew up surrounded by boxers,” enabling him to resist the lure of the streets and to be reeled into the sport by his father.  The youngster competed in and and won local tournaments, building a foundation toward going 181-5-5 as an amateur and earning a South American Games gold medal.

Along the way, Castano defeated current 147-pound champion Errol Spence, 2012 Olympic silver medalist Esquiva Falcao and, in the World Series of Boxing, Sergiy Derevyanchenko, loser of 160-pound titles by split- and unanimous decision to Daniel Jacobs and Gennady Golovkin in October 2018 and 2019.

Castano debuted in September and October 2012 with fourth- and fifth-round TKOs of Alejandro Antonio Domingez and Jose Carlos Paz.

There were three more victories in 2013 comprising a six-round unanimous decision over Pablo Martin Roldan (January) and second- and fifth-round TKOs over Cesar Humberto Velez (May) and Claudinei Lacerda (October), and another set of TKOs 2013 in the second and fourth rounds over Juan Alberto Nicolas Cueller (April) and Cesar Adrian Sastre Silva (June).

Castano was 7-0 with six knockouts when he agreed to fight 147-pound Argentine Sebastian Lujan in the summer of 2014 only to faint from dehydration.

Carlos rushed his son to a hospital in their native Buenos Aires from which he was later released, but his son required a seven-month layoff and a psychologist for panic attacks and before resuming his career with second-round TKO of Crispulo Javier Andino in April 2015.

“At first, I wasn’t sure if I would keep fighting. I’m not gonna lie. I didn’t know what was really going on in my mind...After that, I said to myself, ‘This situation cannot beat me.’ I knew it was not gonna be easy, but I tried my best and knew I had to get some help. So, I started training with my psychologist at the time and I said, ‘I’ve got to beat this,’” said Castano, whose four victories in 2015 improved his mark to 11-0 with eight knockouts.

“I see it as a learning experience, a lesson. After that, I started training in a different manner, I focused more and started taking it more seriously. I think it bettered me as a person, too, from a psychological perspective. I learned to handle difficult situations. Once you learn to handle your own mind, I think you’re able to accomplish anything. To me, that was a very rich experience, a rich lesson, not only for my career, but my life.”

Castano closed 2015 with triumphs by first-round stoppage, disqualification and unanimous decision over Todd Manuel (June), Jonathan Batista (August) and Aaron Garcia (December) before going 5-0-1 with four knockouts over a nearly three-and-a-half-year period, rising to his current mark of 16-0-1 overall with 12 stoppage victories.

The run began a fifth-round TKO of Marcus Upshaw in July 2016. Castano survived a treacherous moment during an interim title-winning two-knockdown, sixth-round KO Emmanuel de Jesus in November 2016, being dropped in the second round. But Castano floored de Jesus once each in the first and sixth with powerful right hands, the last to the solar plexus sending the Puerto Rican for good.

Castano was the underdog entering a July 2017 split-decision over Michel Soro, who was not only fighting before his partisan French fans, but had gone 8-0-1 with eight knockouts in his previous nine fights, including seven straight stoppages.

Elevated to the status of WBA regular champion after defeating Soro, Castano scored a 12th-round TKO over left-handed Cedric Vitu in March 2018, doing so against a man who entered with a record of 46-2 with 19 KOs and was riding an 11-fight winning streak that included four knockouts.

A MAN ON A MISSION

In March 2019, Castano battled to a disputed draw with legendary Cuban southpaw Erislandy Lara —a bout many felt Castano won.

In a strange move, Lara now holds the title Castano held when they fought, owing to the latter's being stripped after a mandatory rematch with Soro fell through over failed negotiations, and Lara's winning the vacant crown via second-round stoppage of Ramon Alvarez in August.

“The Lara fight did frustrate me. I knew, and I know today, I could have done more and I could have thrown more punches,” said Castano of Lara, who was coming off a split decision to then IBF/WBA champion Jarrett Hurd in April 2018.

“I know I won that fight [against Lara.] I’m ready to be a champion again. I’m prepared for any of the champions in my division. There are lots of great fighters in this weight class, but I truly believe that I can beat any of them.”

On November 21, 2019, Castano took on the dangerous Wale Omotoso MGM National Harbor, Oxon Hill. It was one of the finest performances of his career as Castano completely dismantled Omotoso, stopping him in five one-sided rounds.

On February 13, 2021, Castano received the opportunity he had been waiting for: another world title shot. In the opposite corner was WBO world 154-pound champ Brian Teixeira. Experts considered the anticipated matchup to be an even one going in.

Castano had other plans, dominating from start to finish to win a wide unanimous decision by scores of 120-108, 119-109 and 117-111. The win set up a showdown versus unified champion Jermell Charlo on Saturday, July 17, at AT&T Center in San Antonio, in a battle to become the first ever undisputed champion at 154-pounds in the four-belt era.

The outcome wasn’t preferred but what led to it is something everyone would want to see again. Charlo landed a number of beautiful shots on Castano but theArgentinean wouldn’t go away. In fact, he kept coming forward. The thrilling back and forth ended in a split-decision draw. Judge Steve Weisfeld had 114-113 for Castaño, while Nelson Vazquez had it 117-111 for Charlo and Tim Cheatham scored it 114-114.

“I won the fight,” Castaño said. “There were some rounds where he hit me hard. I was hurt in the 10th round and I had to recoup. Same with the beginning of the 11th round. But I did enough to win this fight. I hope I get the rematch. He is a great fighter. I need the rematch.”

The two would square off again on May 14, 2022, atop a Premier Boxing Champions event on SHOWTIME, live from Dignity Health Sports Park in Carson, California. Again, it was a war from the opening bell with both fighters having their moments. However, Charlo was simply better this time, stopping Castano in the tenth to capture the undisputed 154-pound crown.