Erislandy Lara defected from Cuba in 2008 and has since established himself as one of the world’s top boxers at 154 pounds. Read Bio 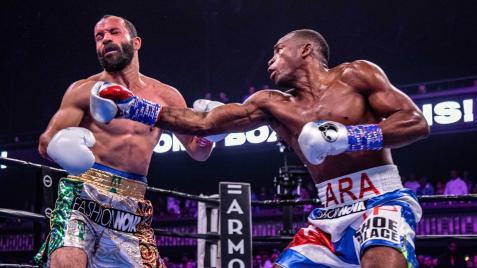 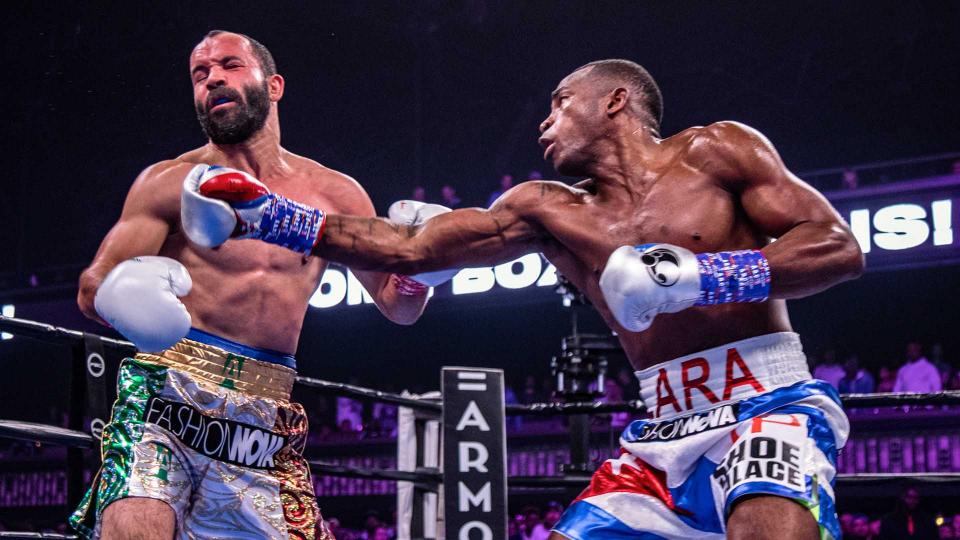 Erislandy "The American Dream" Lara regains the WBA Super Welterweight title via a TKO win over Ramon Alvarez in the main event of PBC on FOX. 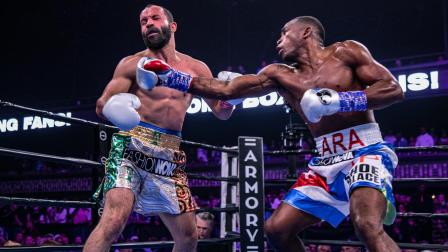 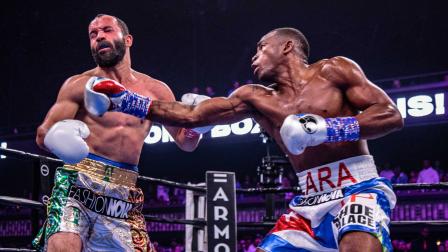 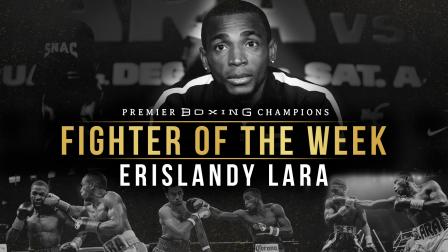 Fighter Of The Week: Erislandy Lara click here to get video transcript

Lara is Champion Once Again, Demolishes Alvarez in Two

Erislandy Lara: The Amazing Journey of a Man who Dared to Dream

A defensive whiz and studious technician, Erislandy Lara fights like someone who possesses a doctorate in the sweet science. "The American Dream” one of the slickest, most elusive fighters in the sport, as hard for some of his opponents to make solid contact with as a gust of wind.

From defector to contender

Born in Guantanamo, Cuba, Lara began contributing to the rich boxing legacy of his homeland when he was a teenager, becoming a three-time national amateur champion at 147 pounds from 2005-07, fighting 320 times and winning all but 10 of his bouts.

Lara would turn pro in 2008 after defecting from Cuba, relocating to Miami where he began to establish himself as one of boxing’s craftiest fighters.

“I describe myself as a technical specialist,” Lara said in a 2009 interview with Boxing247.com. “I never, ever go looking for a KO. If one comes, it just comes. … I use my brain in a fight. I am patient in the ring and I use my skills.”

A tough road toward the top

Despite seemingly controlling the action throughout the fight and tagging his opponent with his left hand at will, Lara nevertheless dropped a hotly debated majority decision to Williams in Atlantic City, New Jersey.

Afterward, the New Jersey State Athletic Control Board indefinitely suspended all three judges due to concerns about the way they scored the fight.

Lara rebounded from the Williams loss in punishing fashion by hammering Ronald Hearns in a first-round TKO win in Biloxi, Mississippi, in April 2012.

After then defeating Freddy Hernandez, Lara fought Vanes Martirosyan to a draw in a bloody back-and-forth battle in Las Vegas in November 2012.

The fight was stopped in the ninth round after an accidental head butt opened a gash under Martirosyan’s left eye.

Undeterred, Lara next took on Alfredo Angulo in Carson, California, in June 2013, in a 154-pound title fight.

Lara used Angulo’s come-forward style against him via precision counterpunching, which led to a 10th-round TKO win for Lara after a hematoma blossomed around Angulo’s left eye.

From big promise to even bigger stages

In an intense contrast of styles, Lara moved on from Angulo to face dynamic boxer Austin Trout, beating him in a 12-round unanimous decision in Brooklyn, New York, in December 2013.

The victory over Trout set the stage for the biggest fight of Lara’s career: a July 2014 pay-per-view nontitle clash in Las Vegas with Mexican superstar Saul “Canelo” Alvarez.

Though doubling Alvarez in terms of total punches landed while also landing those punches at a higher accuracy rate, Alvarez earned a split-decision victory in a close, competitive fight.

Lara had an easier time of it in his next fight, defending his world title with a unanimous decision over Ishe Smith in San Antonio in December 2014.

Pitching a shutout in Chicago

Two nights after throwing out the first pitch before the Astros-White Sox baseball game at Chicago's U.S. Cellular Field, Lara delivered more strikes in the Windy City when he faced Delvin Rodriguez at the UIC Pavilion on June 12, 2015, in a headlining bout on Spike TV.

Lara dominated from the opening bell, landing straight left hands with pinpoint precision and peppering Rodriguez with his jab.

The Cuban southpaw maintained his rhythm for 12 rounds, systematically picking apart Rodriguez with his speed and power.

Rodriguez had no answers against Lara, who scored a knockdown with a left-right combination late in the sixth round.

The dominance was reflected in the scorecards of the judges, all of whom awarded every round to Lara as he retained his 154-pound world title.

Lara followed up that win with another on November 25, 2015, scoring a third-round technical knockout over Jan Zaveck at Hialeah Park Racing & Casino in Florida.

Lara continued his winning ways on May 21, 2016, winning a 12-round unanimous decision over Vanes Martirosyan at The Cosmopolitan in Las Vegas, Nevada.

Lara was simply rolling over every contender that came his way at 154-pounds. On January 13, 2017, he successfully defended his WBA World Super Welterweight title a fifth time, thoroughly outboxing Yuri Foreman for three rounds before registering a fourth-round knockout courtesy of a devastating left uppercut at Hialeah Park Racing & Casino in Hialeah, Florida.

Lara gained a dubious third-round knockdown when referee Samuel Burgos ruled that Foreman hit the canvas from a double-straight left to the chin, even though TV replays showed the fall was the result of the fighters’ legs getting entangled.

There would be no questioning the blow that ended the fight, however.

As the 36-year-old Foreman walked in and missed with a punch, Lara ripped a pinpoint counter left uppercut that first hit Foreman square on the chest before connecting flush on his chin.

Foreman immediately dropped to all fours, and although he tried several times to get to his feet, his legs wouldn’t cooperate. By the time Foreman finally got upright, it was too late, as Burgos reached the count of 10, with the official end coming at the 1:47 mark.

On October 14, 2017, Lara dominated Terrell Gausha, dropping him in the fourth en route to a 12-round unanimous decision and retain his title before 7,643 at Barclays Center. Lara landed 121 of 528 total punches thrown to Gausha’s 77 of 329.

BACK TO BACK WARS

On April 7, 2018, Lara took on undefeated IBF World Super Welterweight Champion "Swift" Jarrett Hurd in an anticipated 154-pound world title unification bout at Hard Rock Hotel & Casino in Las Vegas, Nevada. It was one of the greatest fights in recent memory, winning the Boxing Writers Association of America's "2018 Fight of the Year" Award.

The difference in the razor-thin battle was a short left hook that floored Lara in the final minute of the fight. Had the 27-year-old Hurd not scored the knockdown, the fight would have been ruled a majority draw. Instead, he captured 12-round split-decision victory.

Hurd applied relentless pressure from the opening round, pressing forward against the crafty southpaw. He pounded the body, yet often neglected defense and ate punishing counter shots for 11 rounds.

But the difference for Lara (25-3-2, 14 KOs), who was making the seventh defense of his title, was the brutal 12th round. With blood seeping from a swollen right eye, Hurd connected on a short left hook that floored Lara for the first time in nearly five years.

"It was a great fight for the fans. I stood there, fought and it was fun. I thought I clearly won the fight."

Castaño, who was fighting in his first U.S. main event, held a large advantage in power connects (181-103) while Lara (25-3-3, 14 KOs) found success landing his left hand down the middle on his way to a 34 percent to 27 percent advantage in power accuracy.

On August 31, 2019, Lara reminded fight fans that he remained among the division's best, knocking out Ramon Alvarez in two rounds at Minneapolis Armory in Minneapolis, Minnesota. With the win, Lara captured the WBA World Super Welterweight title.

"Having this belt back on my shoulder feels great," said Lara. "It means the world to be champion again. I felt like in my past fights I didn't lose, and that stings a bit, but to come back and win the title feels great. I'm back."

Lara applied pressure early and in the second round he landed a flurry of punches that sent Alvarez halfway through the ropes, causing the referee to rule it a knockdown. Once Lara had Alvarez hurt, he didn't hesitate to finish the bout.