Undefeated lightweight prospect has honed his elite skills at Mayweather Boxing Club and is primed to become a future world champion. Read Bio 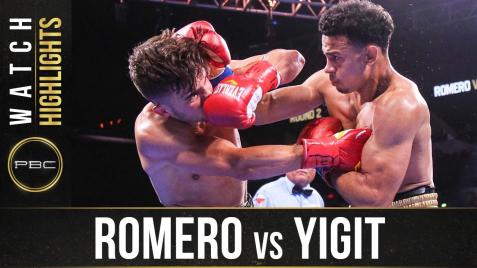 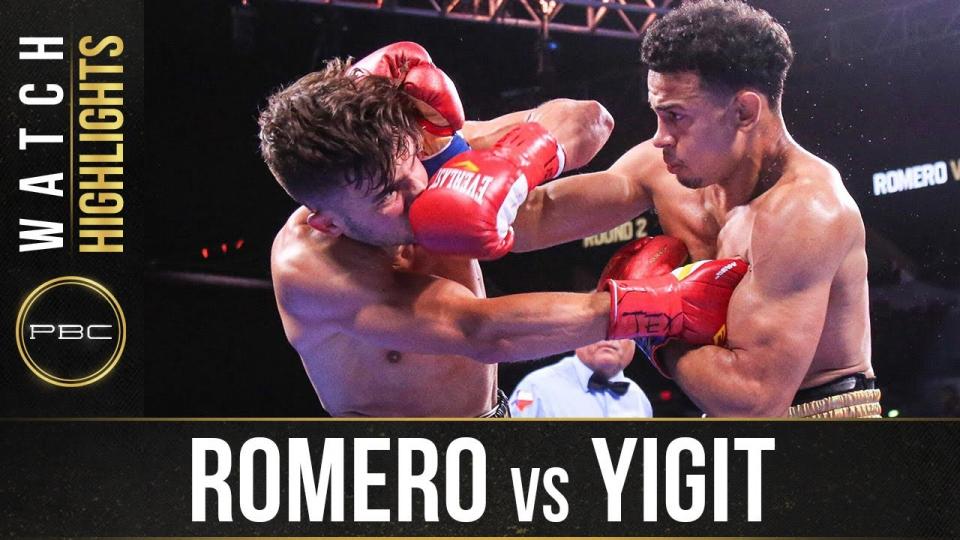 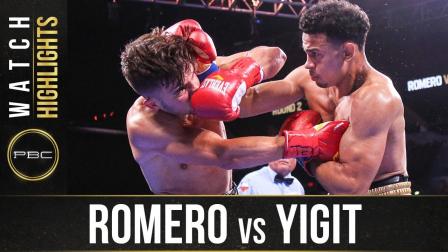 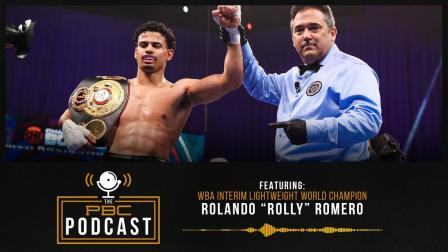 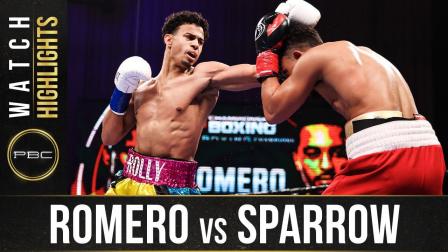 Two of boxing's elite lay it all on the line for the undisputed 154-pound crown in a thrilling back-and-forth battle Saturday night on PBC on SHOWTIME.

Romero, the undefeated Interim WBA lightweight champ, discusses his return in the co-main event to the epic undisputed battle between 154-pound champs Jermell Charlo and Brian Castano Saturday night on PBC on SHOWTIME.

The unbeaten Philly native puts on an elite-level performance Saturday night on SHOWTIME, displaying both skill and will as he hands the game Leo his first loss and wrests away the 122-pound strap.

Rising lightweight Rolando "Rolly" Romero has earned a reputation as one of the hardest hitting prospects in boxing today. The undefeated Nevada native carries a swag to go along with his skill, making him a sure bet to become a future star.

Rolando Romero slept through gunshots in his downtown Las Vegas neighborhood as a child. One day, the savagery found its way to the doorstep of his family's home.

“I was raised in downtown Las Vegas, which has always been a bad area. Growing up, there was a lot of violence," said Romero.

“When I was about seven years old, the brother of my best friend at the time got shot and killed right in front of my house."

As a nine-year-old, Romero began transitioning any built-up ferocity into Judo, where he excelled along with his sister, Angelica, a seven-time national champion.

“I started at the same time as my sister, who is a year and a half younger than me,” said Romero, whose nickname, “Rolly,” came from his father, Rolando Sr. “I won a lot of tournaments, but I wound up in second place in all of the national tournaments I competed in.”

Romero gloved up for the first time as a 16-year-old at the Las Vegas-based Johnny Tocco’s Ringside Gym, having been encouraged by Rolando Sr., a former boxer in his native Cuba.

“I didn’t start boxing until after watching the Olympics of 2012,” said Romero, whose father assists head trainer Cromwell Gordon Bullet. “Up until that moment, I never really cared about boxing. It had been a chore for me because I had never sparred. But then I started thinking, ‘I can do this.’”

A subsequent trip to Cuba further stoked Romero’s hunger. “I was over there for about three weeks and trained a few times, but the poverty over there was horrible and unreal,” said Romero. “It changed my mentality not so much boxing but about being grateful. It made me grow up a little bit.”

“I did some rounds with a lot of top guys. I can punch very hard, so I stopped a lot of people. When one of those sessions was about to start, Floyd hopped up on the side of the ring. I beat the s--t out of that guy that day,” said Romero.

“So the next day, I went over there again, I did some more damage, and, once again, Floyd hops on the ring. I was feeling so good, because he said he wanted to sign me. He gave me his number, I called a week later, and the next day I was signed [in November 2016].”

Romero’s professional debut was a 61-second stoppage of David Courtney in December 2016 followed in 2017 by a fourth-round TKO of Adrian Levya (May) and a second-round knockout of Johnny Estrada (October).

In 2018, Romero had knockouts in three of four victories comprising a unanimous decision over Javier Martinez (August) and stoppages in the first, first and second rounds over Alex Silva (January), Dieumerci Nzau (October) and Rondale Hubbert (December).

Nzau was knocked out in 77 seconds and for the first time in his career, while Hubbert was halted for only the third time but swifter than ever previously.

“I’m a combination of my two favorite fighters: Prince Naseem Hamed and Roberto Duran,” said Romero, who has competed at weights ranging from 132 ¾ to 138 pounds. “I believe Roberto Duran was the best lightweight of all time, and if we ever fought, he’d whoop my ass. But I’m an explosive counter-puncher who can do so many things well.”

Rolly’s On A Roll

Romero has stopped his last six opponents and scored a combined nine knockdowns, with all of those victims boasting winning records when they faced him.

Velazquez lasted 62 seconds with Romero, who flattened Martinez on the undercard of then-welterweight champion Shawn Porter’s split-decision over Yordenis Ugas.

Romero hammered Figueroa on the undercard of former two-division title winner Danny Garcia’s seventh-round knockout of Adrian Granados, and Cardones entered at 14-1 with nine knockouts, being stopped for only the second time in his career as well as in the fastest.

“With Martinez, it was an uppercut, a hook and a straight right that shattered his nose. He literally leaked out like a pint of blood," said Romero. "Figueroa was a masterpiece that I thought should have been a knockout of the year, ending with an uppercut on the chin and a hook that knocked him out cold. With Cardones, I pawed with my left, hurt him with a right hand and it was over."

Romero’s last victory in February was a two-knockdown, second-round knockout of Arturs Ahmetovs, who entered at 5-0 with two knockouts.

“I already knew that the guy in my last fight [Ahmetovs] was undefeated, but when I heard he was a world amateur champion, I was really inspired," said Romero.

"I threw a straight right that dropped him once, then I dropped him with an uppercut to the face. He got up, but the referee stopped it soon after. I think he knew that if I dropped him again, he wasn’t going to recover.”

Romero doesn’t think he’s far away from a title opportunity at 135 pounds.

“If I was to get offered a shot at a lightweight world champion for my next fight, I’m gonna take it. I feel like I’m ready for any of the 135-pound champion belt holders right now, and I don’t care if it’s a guy they consider a pound-for-pound great,” said Romero, who is 8-0 with seven knockouts in Las Vegas.

“I'm one of those fighters in Las Vegas they may as well put on a ‘Do Not Spar’ list’ and say, ‘Just stay away from this kid, because it’s not going to end well.’ I’ve stopped all sorts of people in the gym, including world champions. For me, it’s just part of the job, and I you haven’t seen the best of me yet.”

On August 15, 2020, Romero faced fellow unbeaten Jackson Maríñez as part of a PBC on SHOWTIME Championship Boxing triple-header. On the line was the interim WBA World Lightweight title.

Romero was the aggressor throughout although Maríñez controlled the action for stretches. The back and forth ended with Romero winning  a controversial unanimous decision over Maríñez (19-1, 7 KOs) to capture the title. The scores were 115-113, 116-112 and 118-110, all in favor of Romero.

“I don’t think I had a bad performance,” said Romero, who confidently predicted a brutal knockout would end the bout in his pre-fight comments. “I thought I won the fight. Regardless of everything, I’m the world champ now. I’m happy.”

Romero suffered a slight cut above his left eye in the ninth round on a head butt, but it didn’t seem to affect his performance in the championship rounds. “He came out a little bit tougher and slicker than what I thought,” Romero said. “But all he did was move around the entire fight. He didn’t even try to engage. It’s hard to knock out someone who doesn’t try to engage. I hurt him multiple times with body shots and a few hooks. There was one moment I hurt him with a right hand and he pulled my head down. It was just hard to finish him off.

“Yeah [I would give him a rematch]. He didn’t do anything special.”

On January 23, 2021, "Rolly" took on veteran Avery Sparrow in a PBC on SHOWTIME event from Mohegan Sun in Uncasville, Connecticut. Romero remained unbeaten against Sparrow (10-4, 3 KOs) with a dominating performance that led Sparrow’s corner to call an end to the fight in seventh round. All three judges had the fight scored 60-51 at the time of the technical knockout stoppage.

Romero fought a second time in 2021, this time on July 17, against Anthony Yigit in another PBC on SHOWTIME event, this time from AT&T Center in San Antonio, Texas.
Romero delivered another impressive knockout, flooring Anthony Yigit three times on his way to a seventh-round TKO victory to retain his WBA Interim World Lightweight Title.

Romero controlled the action throughout, punishing southpaw Yigit to the head and body.

“I won’t rate my performance but I got a vicious knockout and I hurt him multiple times in the fight. Every time I landed something, I hurt him,” said Romero. “The European style is always awkward and he was a bigger dude. He’s a 140-pounder. If I had those extra five pounds, I would have got him out of there earlier.”