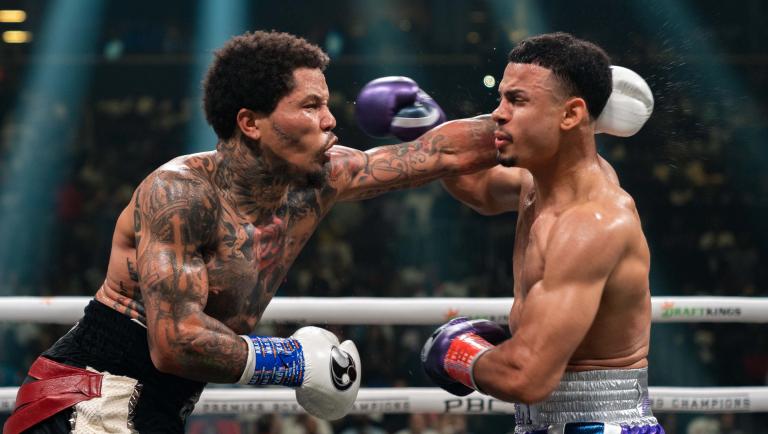 For Davis, it was a return to the venue where he won his first world title via a star-making 2017 KO of Jose Pedraza. Saturday’s event was the highest grossing and most attended (18,970) boxing event in the venue’s history.

“We did it again in New York City baby,” said Davis. “Thank you New York City. I won my first belt here and it was great to come back to Brooklyn and do it again.”

The fierce rivals finally settled their war of words in the ring in a highly-anticipated event, although the early rounds saw the fighters largely feeling each other out. Davis (27-0, 25 KOs), a three-division world champion, showed off his movement and boxing abilities through those rounds, while Romero (14-1, 12 KOs), who promised a first-round knockout, was unable to hurt Davis despite pushing the pace initially.

“He was strong for sure but there were a couple shots that I was getting warmed up with and he caught me and I was like, ‘I can’t sit with him just yet,’” said Davis. “I know when to take it to my opponents and when to chill out. There was someone in the crowd and they were telling me to press forward and I was like, not yet. I got to loosen him up a little more.”

In round six, Davis gave his legions of loyal fans what they had come out to see, landing the decisive blow as he had guaranteed in the pre-fight build-up. Davis closed the show with a fierce counter left hook that sent Romero face first into the ropes and onto the mat.

While Romero was able to rise to his feet, referee David Fields had seen enough and waived off the action 2:49 into the round. The fight was fairly even statistically, with Davis only out-landing Romero 25-22, but with a significant edge in punch accuracy (30% to 19%) according to CompuBox.

After the fight, Romero stated his intention on a rematch, while Davis thanked Romero for accepting the fight.

“I want the fight again,” said Romero. “I exposed him and won every single round. I jumped into something and ate a stupid shot.”

“I was thinking as this interview was coming up and as much as I wanted to be cocky, but I want to thank ‘Rolly,’” said Davis. “I want to thank his team. We settled it like men inside the ring. I wish him the best in the future.”