Austin “No Doubt” Trout is an affable guy by nature, yet the southpaw is anything but easygoing as he seeks to reclaim his 154-pound world title. Read Bio 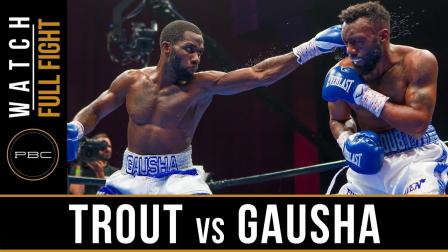 Trout vs Gausha - Watch Full Fight | May 25, 2019 click here to get video transcript 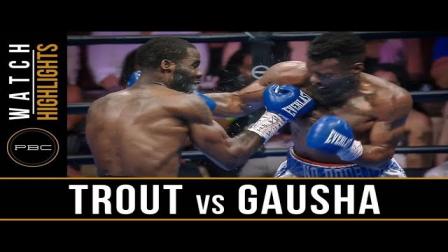 Trout vs Gausha - Watch Fight Highlights | May 25, 2019 click here to get video transcript 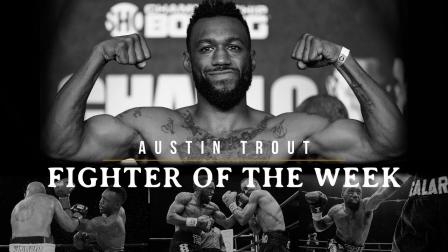 Fighter Of The Week: Austin Trout click here to get video transcript

Trout-Gausha Ends in 10-Round Split Draw

Former World Super Welterweight Champion Austin Trout was fortunate to escape with a 10-round split decision draw with Terrell Gausha in their 154-pound bout Saturday night on FS1.

Trout vs. Gausha: Put Up or Shut Up

It’s a classic crossroads matchup Saturday night when Austin Trout and Terrell Gausha square off in a super welterweight showdown on PBC on FS1.

Talk to Austin Trout for a few minutes, and you’d never guess this easygoing guy with quick wit is a heavy hitter with more than a few impressive notches in the ring posts. But you’d be oh-so-wrong in your assessment of one of the top 154-pounders in the game.

As a 10-year-old already involved in a bevy of sports, all it took was a drive past a Las Cruces, New Mexico, boxing gym to get a young Austin Trout itching to give the sport a try. His mother, M.J., wasn’t thrilled about having to chauffeur her son to his newfound interest on top of baseball, soccer and the rest, but she went along with it.

Even though M.J. cried during Trout’s first fights, she quickly came around. By the time seventh grade rolled around and Trout wanted to try basketball, she told him if it was going on at the same time as boxing, he’d have to choose one or the other. “I thank her for that, because I’m not very good at basketball,” Trout says.

With little left to prove as an amateur, Trout made his professional debut two days before his 20th birthday, scoring a third-round TKO of Justo Almazan in Albuquerque, New Mexico, in September 2005.

Trout campaigned largely in the Southwest over the first four years of his career, going 21-0 to set up his first title shot.

He had to endure a 15-month layoff before getting his opportunity in February 2011, but in order to become a world champion he’d have to defeat Rigoberto Alvarez in his opponent’s native state of Jalisco, Mexico.

Trout not only dominated Alvarez on his home turf, winning 11 of the 12 rounds on all three judges’ scorecards, but he returned to Mexico four months later to make his first title defense against David Lopez. In that fight, Trout scored an 11th-round knockdown and won another wide unanimous decision.

Fighting before an overwhelmingly pro-Cotto crowd, Trout outworked and outboxed his Puerto Rican opponent, sweeping the decision by scores of 117-111 twice and 119-109.

Tough at the top

Things got no easier for Trout in his next title defense as he took on Saul “Canelo” Alvarez in April 2013 in front of 40,000 mostly pro-Alvarez fanatics at the Alamodome in San Antonio.

Trout, who came into the battle of unbeatens as a nearly 2-to-1 underdog despite being the champ, was sent to the canvas for the first time in his career in the seventh round. He would stand tall the rest of the way, but Alvarez won a unanimous decision.

With his championship run halted, Trout didn’t waste any time getting right back into the title hunt with a fight against Erislandy Lara in Brooklyn, New York, in December 2013. Lara controlled the fight, however, and knocked down Trout in the 11th round en route to winning a unanimous decision.

Trout regrouped with two wins in Temecula, California, in 2014. In August, he was floored twice in the third round by Daniel Dawson, but roared back to take a wide 10-round unanimous decision. He then stopped Luis Grajeda in seven rounds in December.

Trout continued his climb back to the top as he made his Premier Boxing Champions debut in May 2015 with a seventh-round TKO of Luis Galarza in Hidalgo, Texas.

Trout’s four-fight comeback run continued with successive knockouts of Luis Grajeda in seven rounds in December 2014 and sixth-round stoppages of Luis Galarza and Joey Hernandez in May and September 2015.

Following consecutive title-bout losses by unanimous decision and 10th-round stoppage to Jermall Charlo and Jarrett Hurd in May 2016 and October 2017, Trout’s unanimous decision over Juan De Angel in February positioned him for yet another championship challenge opposite Jermell Charlo June 9 at The Staples Center in Los Angeles.

While he was officially knocked down twice, Trout—who lost by majority decision as two judges scored the bout 118-108 and 115-111 in favor of Charlo, and the third scored it a 113-113 draw—argued that one of the punches was illegal.

“Take those knockdowns away I won the fight,” said Trout, who also went the distance in a unanimous-decision loss against Jermell’s twin brother and interim middleweight titleholder Jermall in 2016. “I can’t make any excuses, the better man won with those knockdowns.

“Both Jermell and Jermall are really good. They are the future. But I’m not done yet. I’m not defined by my results. I’m defined by the risks I take. I’ve taken the risks and I’ve stood my ground every time against giants and killers. And I’m still here.”