Yenifel Vicente dropped unbeaten Juan Dominguez with a vicious overhand right early in the third round to gain a stunning knockout.

It was supposed to be unbeaten Juan Dominguez's nationally televised coming-out party, but countryman Yenifel Vicente turned the lights out early.

After controlling the tempo in the first two rounds, Vicente knocked Dominguez out cold with a roundhouse sledgehammer of a right hand that left his opponent flat on his back in the center of the ring as referee Earl Brown waved an end to the bout 20 seconds into the third round at Sun National Bank Center in Trenton, New Jersey.

Dominguez left the ring on a stretcher but was responsive and moving soon afterward. He was taken to the hospital for further evaluation.

Vicente (28-3-2, 20 KOs) was aggressive from the outset, swarming his fellow 122-pound Dominican Republic native with a two-fisted attack. Dominguez (19-1, 13 KOs) had a point deducted in the second round for repeated low blows, but it hardly slowed Vicente.

Soon after the start of the third, Vicente reared back near the center of the ring and caught Dominguez perfectly with the final blow, his overhand right making a late case for knockout of the year. 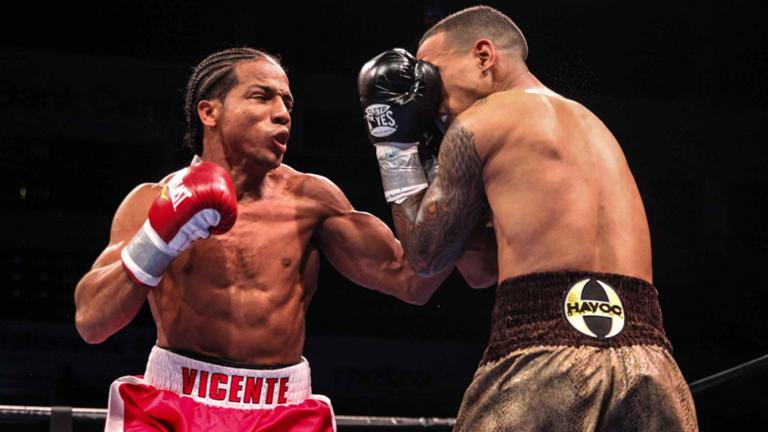 Thunder from ‘Lightning’: Yenifel Vicente’s perfect punch is PBC’s Knockout of the Year

Choosing the top knockout of 2015 was akin to asking the mother of a brain surgeon, rocket scientist and fighter pilot to pick her smartest kid: There’s no easy answer, and no wrong answer.

Juan Dominguez ready to put unbeaten mark on the line