The latest sensation out of Derrick James' famed Dallas gym, unbeaten lightweight Frank Martin is on a fast track toward a world title, dazzling fight fans with his skill and athleticism. Read Bio 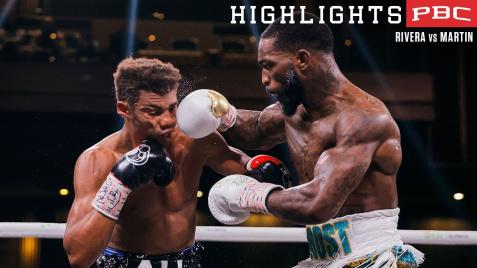 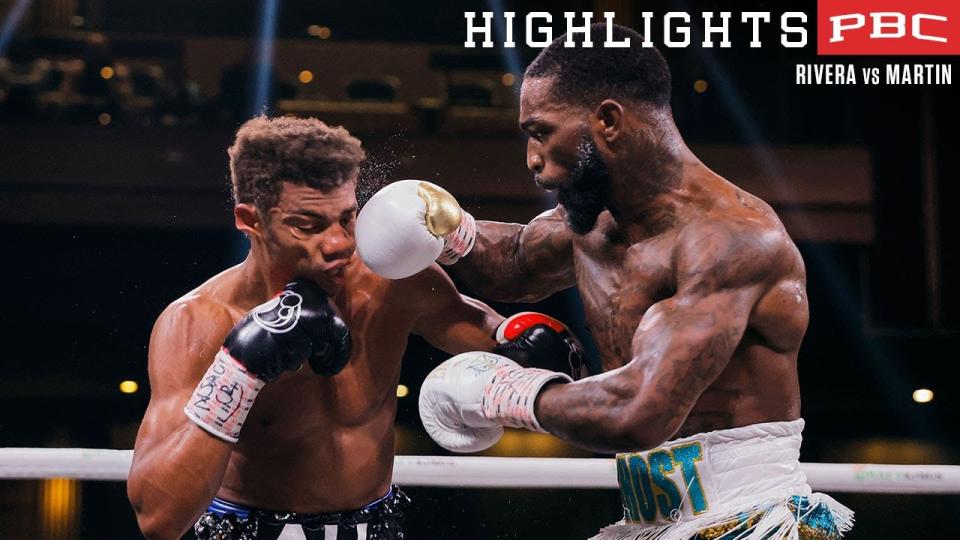 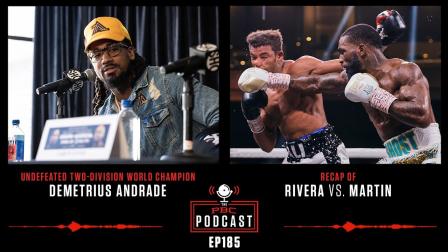 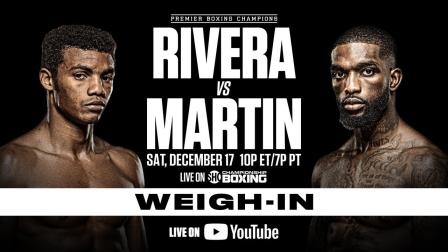 What was considered a 50-50 clash beforehand turned into a one-sided affair as the undefeated Martin hands Rivera his first loss Saturday night in a PBC main event on SHOWTIME.

Fight fans are getting an early Holiday gift in the form of one of the best matchups of 2022 as unbeaten lightweights Michel Rivera and Frank Martin throw down Saturday night in a PBC main event on SHOWTIME.

For Frank Martin, The Moment Of Truth Has Arrived

The unbeaten lightweight contender will lay it all on the line when he faces fellow unbeaten 135-pounder Michel Rivera in a highly anticipated PBC main event Saturday night on SHOWTIME.

The latest sensation out of Derrick James' famed Dallas gym, unbeaten lightweight Frank Martin is on a fast track toward a world title, dazzling fight fans with his skill and athleticism.

‘Just An Athlete’ With A Fighting Spirit

Frank Martin had a fighting spirit throughout his childhood in his native Detroit, initially channeling his aggression into wrestling and football.

But after moving to Fort Wayne, Indiana, a 17-year-old Martin ventured into boxing while attending the city’s Homestead High School where he played running back in football and competed in wrestling at 152 pounds.

“I had started wrestling in sixth grade and made it to states as a high school junior,” said Martin, whose mother, Erica, initially did not want him to engage in boxing.  “I was undefeated as a senior in wrestling before I broke out in infantigo during the middle of the year and my season ended prematurely.”

After moving in with his brother in Indianapolis the following year, an 18-year-old Martin took boxing more seriously.

“When I first started fighting, I was just going with it, willing to go wherever it would take me, but then I got serious about it and moved to Indianapolis,” said Martin, a southpaw who is the youngest of six siblings – three each in boys and girls.

“My mom is always supportive, but she couldn’t get into it initially. Once my foundation began to develop, she could see that I’m just an athlete. I was really good at football and wrestling and then boxing sort of became intertwined.”

Martin lost in the semifinals of the National Golden Gloves in 2015, defeating Abraham Nova in the first round of the weight class.

“I just came out of the blue and beat Abraham Nova,” Martin said. “When that happened, people were like, ‘Who was that dude?’ So I had a lot of pride and motivation to win it the next year.”

Martin returned to win the 2016 Golden Gloves Tournament of Champions at 141 pounds, flooring Virgil Ortiz during their title bout.

“Going into the next year I was out to make sure I proved that my first round victory in 2015 wasn’t a fluke, and I was in an entirely different space, mentally,” said Martin, who went 52-6 as an amateur.

“Some of my boxing inspirations are Meldrick Taylor and Pernell Whitaker. I also like the bodywork of fighters like Roberto Duran, and I was watching Errol Spence a lot. My Dad, Frank, is a really big fan of Errol’s.”

Martin’s nickname, “The Ghost,” was born from his preparation for the 2016 Golden Gloves. When the lights suddenly went out in the workout room, Martin found a way to continue his regimen in the dark, his shadow dancing against distant walls while other competitors had stopped training.

Surrounded By The Right People

Martin debuted with a first-round knockout of John Edward Lockette in October 2017, followed by a four-round unanimous decision by Darnell Pettis that December. “The Ghost” stopped all four opponents in 2018, one in the first round and three in the second.

Martin had improved to 10-0 (7 KOs) after 2019. He faced his lone opponent of 2020 that February in a Premier Boxing Champions headlining debut promoted by Floyd Mayweather Jr.,  scoring a one-knockdown, fourth-round TKO of Reymond Yanong, who entered at 10-4-1 (9 KOs).

“My first 10 fights were at armories and untelevised, so I wasn’t getting much exposure, but I had been to Floyd Mayweather’s gym a couple of times and had done some pad work with him,” Martin said.

“I think we did some pad work around the time when [Gervonta Davis] was about to fight Leo Santa Cruz [October 2020,] and Floyd was really surprised at what I could do. He told me that I had the speed and the power to become a world champion.”

Standing 5-foot-8 with a 68-inch reach, Martin displayed a blend of athleticism, blazing speed and combinations, double-fisted power toward finishing skills, and the ability to land from various angles.

“His cousin, Jaylon Smith, wanted us to talk to Frank,” said James. “I assumed that it was about wanting to do a promotional deal with Errol.”

Spence signed Martin, whose first bout was a four-knockdown, fifth-round stoppage of Tyrone Luckey on the December 2020 undercard of Spence’s unanimous decision over former titleholder Danny Garcia on pay per view.

“Errol and Frank have a pretty good relationship, like a big brother,” James said. “Frank is very open and receptive to learning, improving his skills, work ethic and his technique.”

“Gervonta has got skills and power, and that definitely showed me where I’m at,” Martin said. “There were a lot of people in the gym, and nobody left disappointed. I know that I can get in there with the top dogs and do my thing, too.”

Martin’s two fights in 2021 were a seventh-round stoppage of previously unbeaten Jerry Perez in April and a 10-round shutout of Ryan Kielczweski in August.

On January 1, 2022, Martin dazzled once again, dropping veteran Romero Duno twice in the fourth-round to induce a stoppage win that same stanza. Martin scored both knockdowns against Duno off equilibrium-stealing, overhand left counters which prompted Duno’s corner to request a referee’s stoppage.

“Frank is mentally ready for anybody in the division,” James said. “Errol’s bringing him along by choosing the right opponents. It won’t hurt him to take one or two more fights before getting a shot at a world title.”

READY FOR A WORLD TITLE SHOT

On December 17, 2022, Martin took on fellow unbeaten 135-pound contender Michel Rivera in a WBA Lightweight Title Eliminator. Much was riding on the high-stakes battle which many experts considered a 50-50 bout going in.

But Martin shined brightest when the lights were on at The Chelsea inside The Cosmopolitan of Las Vegas, dominating from start to finish to win a 12-round unanimous decision int eh PBC on SHOWTIME headliner.

This is just what I do,” said Martin, who dropped Rivera in the seventh round and won by scores of 120-107, 118-109 and 117-110. “I felt good tonight. There were some things that I saw in there that I didn't capitalize on, but we went in there and got the job done. My corner was telling me to stay on the outside, watch out for the right hand and work the game plan. I was using my legs and I could have done it a lot more. It worked for us tonight, but there's a lot of room for improvement and we're going to keep working.”

The 27-year-old Martin (25-0, 14 KOs) controlled the action throughout, showing superior speed and boxing acumen, as he quickly closed the reach advantage held by Rivera. Promoted by unified welterweight champion Errol Spence Jr. and coached by top trainer Derrick James, Martin has put himself into a prime position in the star-studded 135-pound division.

"It's a blessing to be in the gym with Errol and [undisputed 154-pound champion] Jermell [Charlo] and they keep me going,” said Martin. “I'm always watching Errol when he's sparring and I'm always asking questions and looking to get better. Seeing champions on top like them, I'm getting nothing but game from them.”

The 24-year-old Rivera (16-1, 12 KOs) seemed to struggle with Martin’s southpaw attack, as he continuously ate straight left hands, especially in the early rounds. Rivera had his moments where his length allowed him to land  right hands, but Martin’s footwork routinely allowed him to evade further damage.

"I just believe in myself and I believe in our team,” said Martin. “We know what we're doing and we're working consistently. We believed in it and believed that we're ready for any of the top fighters, so let us get them. We're ready to eat.”