A nine-time amateur national champion from tiny Linden, Michigan has made a big splash to start off his pro career. Read Bio 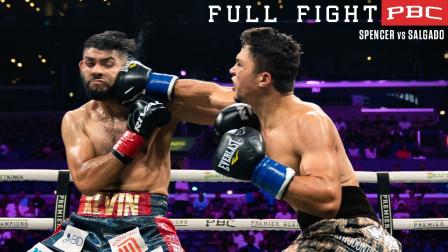 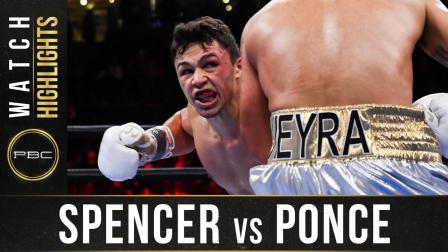 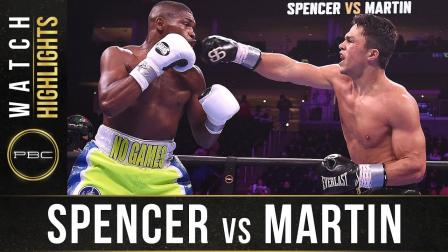 Spencer proves he's a force in the 154-pound division as he cruises past Kevin Salgado on FOX while super bantam Aleem moves one step closer to a world title with a dominant win over Mike Plania on FS1.

Joey Spencer: A Story of Resilience

The undefeated super welterweight is closing in on title contention but must first get past the toughest test of his career, Kevin Salgado Jr., in a battle of unbeatens Sunday, September 4 on FOX.

Following a storied amateur career, 20-year-old Joey Spencer is already making waves in the pros as a super welterweight. Spencer earned PBC's 2019 Prospect of the Year honors. Expect more accolades to come for this fistic prodigy.

Any time Joey Spencer was near his brother Mickel, the siblings would invariably begin slapping-boxing one another. Their roughhousing often produced rearranged living room furniture, broken lamps and splattered glass.

“My little brother, Mickel Spencer, is adopted,” said Spencer, a Lindin, Michigan native. “He came to us when he was about two-years-old. He came from a really rough background, a rough area in Flint, Michigan. His family life before was pretty awful to say the least. We helped his siblings throughout their lives, so we were involved in the inner city a lot. When he started walking, probably at four, we started sparring. We’d go in the living room with the gloves on and move the couches—to pretend we were fighting in a big-fight.

“The only reason I remember he’s adopted is because he’s black.

Spencer often watched his father and trainer, Jason’s, amateur fights, which he began attending at age five. He would also sit beside his patriarch to watch 12-round championship fights, and would often wear his oversized boxing gear, entered a boxing gym as a 6-year-old and began sparring at age 7.

“I saw the tail end of my father’s amateur career. I became a huge fan of the sport at a very young age. Boxing is all I thought about. It’s all I was ever around,” said Spencer, who was home-schooled starting as a high school sophomore.

“At six, I was already fighting, so I was always boxing ‘Kel. He fell in love with it too, so by the time he was eight, he was already a killer. It came to the point by [age] eight, my father got me involved with these different tournaments around the country and it grew from there.”

An 8-year-old Spencer dominated his initial fight against a boy with a slightly better resume.

“It did start at [age] eight. I blew the kid out and I remember thinking that I could be good,” said the 5-foot-9 Spencer, who won his first of nine national titles as an 11-year-old and posted a 90-10 amateur record.

“At that age, if you asked me then what I wanted to be when I grew up, I would have said that I wanted to be a professional boxer. I competed in and started winning national championships.   I dreamed about going to the 2016 Olympics, but because they changed the age to 18 then, I couldn’t go and decided to turn pro.”

The Spencer’s moved to Northern California in 2016, where they worked at the gym of 2011 Trainer Of The Year Virgil Hunter in Hayward, Calif. The younger Spencer also had access to two-division world champion Andre Ward.

“Andre Ward is a close friend of mine. When I moved out to California, before my first fight as a pro when I was 16, I was training in his gym,” said Spencer. “At the time, Andre Ward was holding a camp preparing for Sergey Kovalev, and I was there training.”

Spencer had suffered a shoulder injury, and his physical therapist, during that time, also worked with Ward, later connecting Spencer to Hunter.

“Since then, I’ve been training out there—for about three years,” said Spencer, who also trained alongside other world champions such as Peter Quillin, Amir Khan, and Andre Berto.

“I’ve had a lot of fighters I’ve worked alongside who have been a positive influence,” said Spencer.  “They’re an inspiration to me. Andre Berto is definitely one. There have been a lot of other big names also, like Amir Khan was there at Ward’s gym, holding one of his camps while I was there.”

A Knockout From The Start

A 17-year-old Spencer made his pro debut at the Mandalay Bay Hotel on February 17, 2018. In front of a nationally televised audience, he delivered a second-round TKO of Uriel Gonzalez.

Then in April 2018, Spencer needed only 55 seconds to defeat Ousmane Sylla. That was followed by a first-round knockout of Tom Howard (June), a two-knockdown second-round stoppage of Bruce Lutchmedial (August) and another first-round KO of Cory Macon (September).

“My fourth fight [Lutchmedial] was in New York, on the Andre Berto-Devon Alexander card. Both Andre Ward and Floyd Mayweather were ringside. That was a big deal for me,” said Spencer.

“It was incredible because they’re two of my favorite all-time fighters. Their presence just made me really excited to perform in front of them. That was the first time I met Floyd. It was amazing that they were

Spencer stepped up the competition in 2019, fighting five times in total and winning all of them. On January 13, 2019, he knocked out Brandon Harder in two rounds. That was followed by six-round unanimous decisions over Osias Vasquez (April) and Akeem Black (June) as well as a three-knockdown third-round knockout of Travis Gambardella (September) as Spencer rose to 10-0 with seven KOs.

“I like being right in the middle of the action, without necessarily giving-and-taking. I’m more James Toney than Floyd Mayweather with it; I’m really counterpunch-minded. I like to stay in the pocket,” said Spencer.

“A style of fighting I’ve always admired is when you can get on the inside and it looks like an entertaining fight, but really you’re not getting hit. I love that, being right in the pocket and not getting hit.”

Spencer’s impressive year caught the attention of fight fans – they voted him the PBC 2019 Prospect of the Year.

On August 22, 2020, Spencer put on an explosive power punching display, dropping Shawn West twice on his way to a fourth-round TKO in middleweight action.

Still only 20-years-old, Spencer, now 11-0 (8 KOs), fought with a poise of boxer years older. The former amateur standout patiently sized West up in the first. In the second, he began letting his hands go, forcing West back with hooks to the body.

The fight’s first knockdown occurred in the third, when Spencer landed a one-two and followed up with two more rights that caused West to take a knee.

West beat the count but wouldn’t last much longer. He was wobbled by a series of hooks in the fourth that drove him to the canvas. Referee Jerry Cantu waved it off at 1:28 of the fourth as West stumbled to his feet.

“I felt great about my performance tonight,” said Spencer. “I did everything we had been working on. After the knockdown, I took my time and threw a good flurry. We knew he was tough, so I just stayed calm and took the right shot when it came. I think the experience I’ve had so far in my career showed through in this fight.”

On January 30, 2021, Spencer continued his fast rise up the ranks with an impressive first round KO victory over Isiah Seldon (14-4-1, 5 KOs). He followed that up with a wide, eight-round unanimous decision over James Martin in July 2021 at Prudential Center in Newark.

Then on Christmas Day, Spencer faced veteran Limberth Ponce in a FOX PBC Fight Night from Prudential Center in Newark. Ponce was game but little match to the focused Spencer, who delivered a highlight-reel knockout, ending matters in the fifth round.

On September 4, 2022, Spencer took a major step up in class, facing undefeated Kevin Salgado in a FOX PBC Fight Night from Crypto.com Arena in Los Angeles. Spencer (16-0, 10 KOs) earn a career-best 10-round unanimous decision over Salgado.

"He's a hard-hitting counter puncher, so we wanted to control the distance,” said Spencer. “I feel really strong. I'm really proud of the work that we put into my conditioning and I think it showed in the fight. I'm improving as I get more experience, and that helps me stay more composed in these fights. I'm going to keep adding to my game as I get more comfortable. I'm definitely working towards improving as an offensive fighter.”

In his first 10-round fight as a pro, the 22-year-old Spencer turned away what many considered the toughest opponent of his career, riding an 79 to 54 edge in punches landed to victory. Mexico’s Salgado proved to be a stiff test for Spencer as he continued to push forward until the final bell. After 10 rounds, all three judges saw it in Spencer’s favor by scores of 99-91 twice and 100-90.