Sergey Lipinets overpowered Walter Castillo with a barrage of punches to gain a seventh-round TKO.

Sergey Lipinets wanted to be the first man to knock out Walter Castillo, and the 27-year-old Kazakhstan native delivered in a breakout performance.

Lipinets warmed up as the fight progressed despite a deep cut over his left eye and pummeled Castillo with a barrage of power punches to gain an impressive seventh-round TKO.

Lipinets began the final flurry by landing a perfectly timed counter right hand, which stunned Castillo and allowed Lipinets to turn up the heat as he pinned the Nicaraguan against the ropes and slugged away until referee Bill Clancy stepped in to end the fight at the 2:45 mark.

The 5-foot-10 Castillo was the more effective boxer in the first couple of rounds as he worked behind his jab and was able to land some solid counterpunches.

Lipinets began to land his power shots in Round 3, and was finding the range in the following round when he was cut on his eyelid by what was officially ruled by Clancy to be a clash of heads but was shown by TV replays to have occurred from a Castillo punch.

Lipinets started to take control of the fight when he hurt Castillo in the first minute of Round 6, but he would need another round before he could finish off his Nicaraguan opponent.

It was the first time Castillo, 27, was stopped in 31 career bouts. It was also Castillo’s second straight fight without a victory, following his majority draw against Keita Obara, and dropped him to 1-2-1 in his last four bouts.

For the 5-foot-7 Lipinets, the win comes on the heels of his fifth-round KO of Levan Ghvamichava in March. 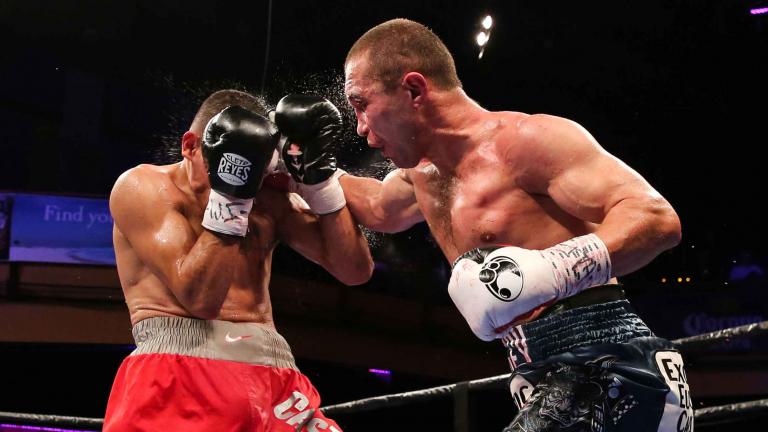 Sergey Lipinets wore down Walter Castillo over the course of their fight and earned a seventh-round TKO. (Nabeel Ahmad/Premier Boxing Champions)

Presenting the 12 Rounds of Christmas: Round 3 (Lipinets vs Castillo)

You like speed, power, precision punching, fancy footwork and granite chins? Sergey Lipinets and Walter Castillo provided all that and more—and that’s just in the first 30 seconds of the third round of their entertaining 140-pound brawl this past summer.

Sergey Lipinets wanted to be the first man to knock out Walter Castillo, and the 27-year-old Kazakhstan native delivered Friday night in a breakout performance.

Walter Castillo is a stone-fisted, steel-chinned Nicaraguan who has never been stopped and has knocked out twice as many opponents as Sergey Lipinets has victories. But those facts aren’t about to force Lipinets to alter his goal heading into Friday’s clash with Castillo.