Fast-rising 140-pound prospect Sergey Lipinets scored a fifth-round KO of Levan "The Wolf” Ghvamichava with a punishing left hook to the body.

It was a close fight for 4½ rounds, but when Sergey Lipinets sent Levan Ghvamichava down to one knee with a perfectly placed left hook to the body, it was on one knee Ghvamichava stayed.

In a matchup of fighters hailing from former Soviet republics, the Kazakhstan-born Lipinets used his jab early to try to set up his power shots. Ghvamichava, a native of Georgia, countered effectively with body shots as he battled Lipinets to an early stalemate.

In the fifth, Lipinets pushed Ghvamichava back toward the ropes before landing a glancing overhand right that sent “The Wolf” scurrying across the ring. Lipinets then unleashed a devastating left to the body that stopped his opponent cold. Ghvamichava dropped to his right knee with a grimace on his face and stayed down long past the count of 10 for a knockout at 1:40 of the round. 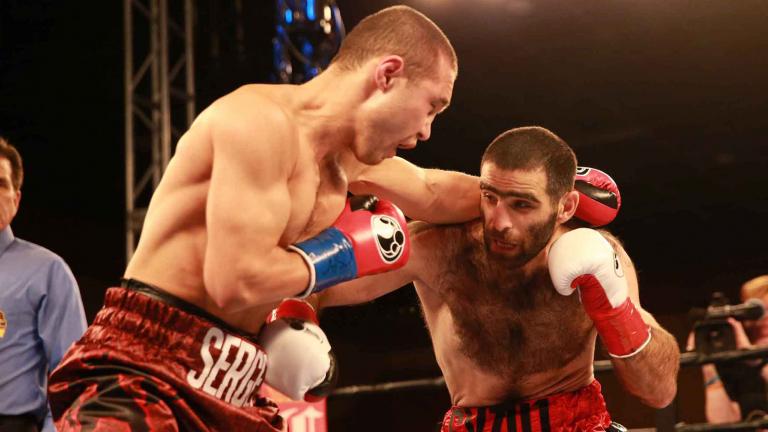 Sergey Lipinets, left, and Levan Ghvamichava exchange punches during their 140-pound bout in Nice, California. Lipinets landed a left hook to the body in the fifth round to gain a knockout. (Dave Nadkarni/Premier Boxing Champions)

Sergey Lipinets said Levan Ghvamichava wouldn’t be able to hold up against his power. Go ahead and add “soothsayer” to Lipinets’ résumé—along with “undefeated 140-pound prospect.”

“The Wolf” is howling. Go ahead, let him bay, says Sergey Lipinets.