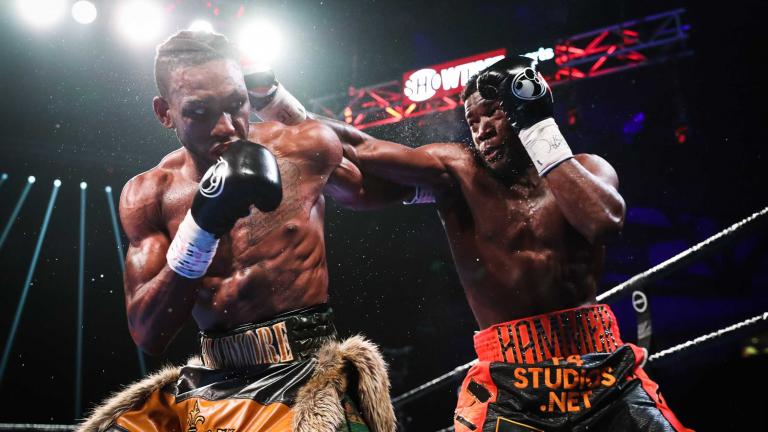 Lubin (22-1, 16 KOs) won his fourth straight fight since a knockout loss to Jermell Charlo in a title challenge in 2017. The 24-year-old landed 42 percent of his power shots en route to the wide decision, scored 99-91 by all three judges.

The southpaw relied on a suburb left hook, attacking from a variety of angles against the durable Gallimore (21-4-1, 17 KOs) as he improved to 4-0 since beginning to train with southpaw specialist Kevin Cunningham.

Cunningham was pleased with his pupil, who was pushed past the fifth round for the first time in more than three years.

Easter (22-1-1 14 KOs), who lost his lightweight title in a unification with Mikey Garcia in 2018, was matched for his first fight a super lightweight against one of boxing's most aggressive, come-forward fighters and the result did not disappoint. Granados charged forward from the opening bell, pressing on the inside against his rangy, 5-foot-11 opponent. In the first half of the fight, Easter pocketed rounds while fighting from a distance, leaning on his speed to win the first four rounds on all three judges' scorecards. But the fight seemed to change tides at the midway point, with Granados able to force the bout to be contested at close range. Rounds seven through 10 featured tremendous, back-and-forth exchanges and the more active Granados seemed to get the better of the exchanges.

One of boxing's most reliable action fighters, Granados (20-8-2, 13 KOs) threw more punches and connected more and was once again frustrated with a decision that did not go his way.

In the opening bout of the telecast, undefeated Cuban heavyweight Frank Sanchez pitched a shutout against Jack Mulowayi, winning a 10-round unanimous decision scored 100-90 by all three judges.

Sanchez (14-0, 11 KOs) was the more active fighter from the opening bell, targeting the body against the defensive-minded Mulowayi (7-2-1, 3 KOs). The 27-year-old Sanchez, who was taken the 10-round distance for the first time, threw over 250 more punches than his opponent.