Daniel Roman pulls out a comeback against Juan Carlos Payano

At 36, Juan Carlos Payano was thought to be a little too old for Daniel Roman. The former WBA world bantamweight champ from the Dominican Republic was coming off two losses in his last three fights.

No one could have envisioned Payano finding a fountain of youth, but that’s what it seemed like after eight rounds.

Then reality set—and age—set in.

Roman wound up pulling out a unanimous 12-round super bantamweight victory in a WBC title eliminator over Payano.

Roman, 30, rallied late, winning the last four rounds on the scorecards of judges Don Trella, David Sutherland and Kevin Morgan, who all scored it 116-112 for Roman.

Payano, a southpaw fighting for the first time at 122, did well through the first six rounds. He came forward, countered Roman well, went to the body and used his footwork to get out of trouble.

Sensing the fight slipping from him, Roman increased his work rate. As the rounds began narrowing down, Roman became more effective. He closed the gap and stayed in the pocket.

In the 10th, Payano (21-4, 9 KOs) appeared bothered by a cut on his left eye, opened in the last minute of the round. Roman went right at him, throwing constant rights against Payano’s left side. The round looked like Roman’s best of the fight, thanks to a consistent body attack.

As the final seconds were ticking away, a Roman sweeping left hook to the body seemed to knock down Payano, but referee John Callas ruled it a slip as the bell sounded.

Roman is looking ahead, at the new WBC super bantamweight champ Luis Nery or a rematch with Akhmadaliev. 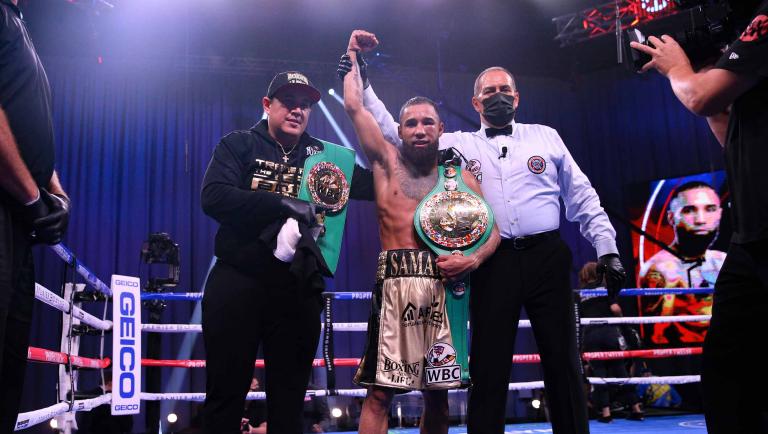 Luis Nery has his hand raised in victory.