If Victor Ortiz has proven one thing in his career, it’s that he’s going to deliver excitement. 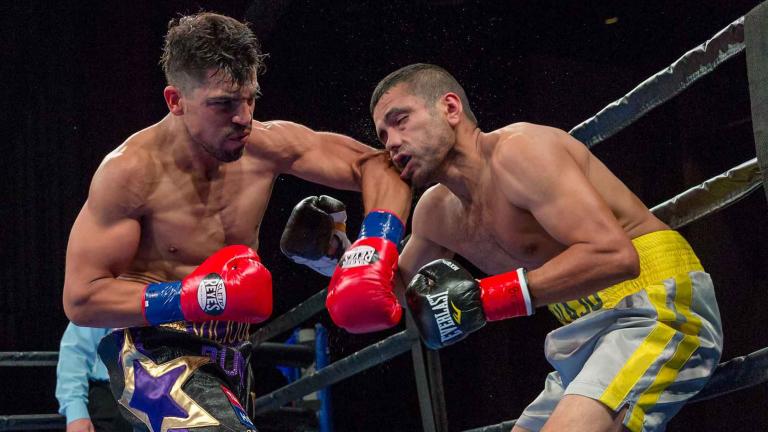 Former world champion Victor Ortiz was sharp in his return from a 15-month hiatus and scored a fourth-round TKO of Saul Corral in their 147-pound bout in Bakersfield, California. (Ryan Hafey/Premier Boxing Champions)

The former 147-pound world champion returned to the ring after 15 months off and wasted little time taking care of Saul Corral with a fourth-round TKO.

Mounting an offense has never been a problem in Ortiz's game, and the 30-year-old southpaw looked sharp in his first fight since being knocked out by Andre Berto in Round 4 of their action-packed rematch in April 2016.

Ortiz employed a fiery attack against Corral with an onslaught of straight lefts and hooks. Corral landed his fair share of punches during their exchanges, but he lacked the sting necessary to slow Ortiz down.

Corral tried his best to tie up the Ventura, California, resident, but earned a point deduction from referee Jack Reiss in Round 3 for excessive holding after multiple warnings. That forced Corral to fight even more, which played into Ortiz's hands.

Ortiz landed a crushing left hand in the fourth that put Corral down in a heap. Somehow, the 30-year-old Mexican made it to his feet, but he had nothing left. Ortiz followed up with a combination seconds later that spurred Reiss to halt the bout at 1:26 into the round.

Ortiz notched a much-needed victory and his highly entertaining style will surely put him in the mix for another big fight. While it remains to be seen if he can return to the top of one of boxing’s deepest divisions, he is certain to give a stiff test to anyone at 147 pounds.

If Victor Ortiz has proven one thing in his career, it’s that he’s going to deliver excitement.

Victor Ortiz has had it all. In addition to winning a 147-pound world title, the 30-year-old southpaw also has gained celebrity in TV and movies, yet he still aspires to return to the top of the fight game.

This week in PBC jabs, host Jordan Hardy previews an action-packed weekend of fights, including a conversation with former 147-pound champion Victor Ortiz before his 10-round showdown Sunday night against Mexico’s Saul Corral on FS1.