Eddie Ramirez overcame a second-round knockdown and stopped Kevin Watts in the seventh to remain unbeaten.

The ages, dimensions and professional records of Eddie Ramirez and Kevin Watts were nearly identical entering their 142-pound clash. But it didn’t take long for Ramirez to separate himself with his power and an overwhelming, double-fisted body attack. 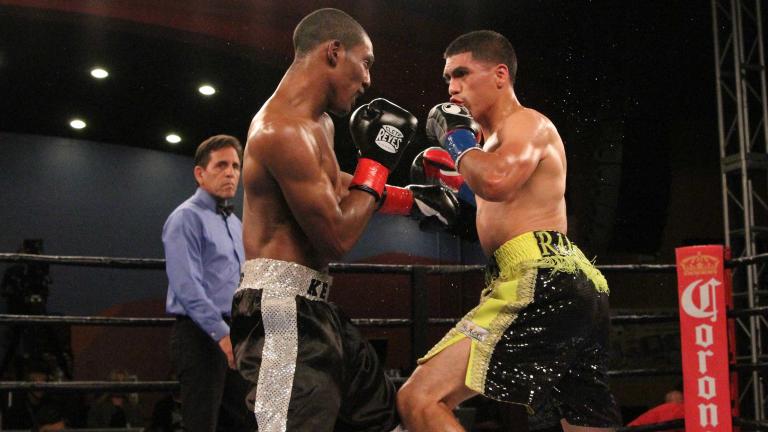 Ramirez rose from a second-round knockdown—the first of his career—and proceeded to hammer away at Watts until ultimately putting him down and out in Round 7 for his seventh stoppage victory in his last 10 fights.

In a matchup of 24-year-old, 5-foot-8 fighters, it was apparent from the start that Ramirez would be the high-volume aggressor and Watts would try to fend off his foe with his speed and counterpunching ability.

Watts’ game plan worked early on, as he used his movement and sharp jab to keep Ramirez at bay. Then midway through the second round, with his back against the ropes and Ramirez bearing down on him, Watts fired a blistering, short right uppercut to the chin that dropped his opponent.

Unfortunately for Watts, aside from a solid counter right hand in Round 3 that buzzed Ramirez, that knockdown would prove to be the final highlight of his night.

With his legs fully under him, Ramirez resumed pressing the action in the middle rounds and scored with several clean power shots to the head. But it was a relentless body attack that did the telling damage, particularly in the fifth and sixth rounds when the Aurora, Illinois, native gained total control of the scheduled 10-round bout.

It was midway through Round 6 that a series of headshots sent Watts crumpling to his knees near the ropes. However, referee Ed Collantes waved off the knockdown, claiming Ramirez dropped Watts with an illegal blow to the back of the head.

Undeterred by that ruling, Ramirez resumed his attack during the decisive seventh, once again bullying Watts into the corner and unleashing a vicious flurry that sent the Southern California native to his knee for a second time.

This time, the knockdown was legit. And this time, Watts didn’t get up, remaining on his right knee as Collantes reached the count of 10, the official end coming at the 1:37 mark.

The ages, dimensions and professional records of Eddie Ramirez and Kevin Watts were nearly identical entering their 142-pound clash Tuesday night. But it didn’t take long for Ramirez to separate himself with his power and an overwhelming, double-fisted body attack.

Undefeated prospects Ramirez, Watts ready to get to know each other

Eddie Ramirez and Kevin Watts have a lot in common—from their age to their height to their unbeaten records to their status as rising 140-pound prospects.

Ramirez, Watts to rumble September 13 in 140-pound battle of unbeatens

Ask boxing fans what they most desire from a fight, and the majority will say they prefer a battle between two evenly matched fighters. Those fans will get just that next month.