IBF and WBC welterweight champion Errol “The Truth” Spence Jr. showed his greatness against WBA champion Yordenis Ugás, battling back from early adversity to stop Ugás in the tenth round.

IBF and WBC welterweight champion Errol “The Truth” Spence Jr. showed his greatness against WBA champion Yordenis Ugás, battling back from early adversity to stop Ugás in the tenth round on SHOWTIME PPV live from AT&T Stadium in Arlington, Texas headlining a Premier Boxing Champions event before an announced crowd of 39,946. Click HERE to watch the Spence victory announcement.

The remaining welterweight title not in Spence’s possession belongs to WBO titleholder Terence Crawford, who was an interested observer on Saturday, Tweeting his reaction to the Spence victory. Spence made clear his preference for his next opponent.

Spence had to overcome some harsh conditions courtesy of Ugás to get to this point. After Ugás hurt Spence in the sixth, knocking his mouthpiece out with an uppercut, Spence of DeSoto, Texas, stormed back to hurt Ugás repeatedly to the body and eye. By the tenth round, Ugás’ right eye was completely shut when referee Laurence Cole stopped the contest for the second time to allow the ringside physician to inspect the damage.

Unlike earlier, the doctor advised Cole to stop the bout at 1:44 of the tenth round, giving Spence (28-0, 22 KOs) a resounding victory, a third welterweight belt, and perhaps the greatest triumph of his still accumulating career following a 17-month layoff after corrective surgery to his left eye forced him to pull out of a mega-fight with Manny Pacquiao. Ugás stepped in for Spence on late notice, beating and retiring Pacquiao last summer, setting the stage for Saturday’s welterweight unification contest, just the 12th in the division’s history.

Ugás’ size and skill appeared to confound Spence early on. The Cuban Olympic bronze medalist hurt Spence with a right uppercut and a right hand that had Spence falling back into the ropes and sent his mouthpiece flying in the sixth. The referee interrupted the action with 1:32 left in the frame to allow trainer Derrick James to replace the mouthpiece. Following the break, Spence returned fire, banging to Ugás’ body to end the frame on a high note.

The referee again interrupted the action with 53 seconds left in the eighth to have the doctor examine Ugás’ right eye, which was nearly shut, the result of Spence timing Ugas with hard right hands. Spence jumped on him moments later, nailing Ugás (27-5, 12 KOs) to the body, sensing the end may be near.

Ugás appeared to hurt Spence to the body with a right hand in the ninth and again with a left to the body, for which he was warned by the referee for veering a little low.

Spence came back and hurt Ugás with a right to the body in the tenth that had him retreating, covering up, clearly in pain. The referee again had the doctor check on Ugas’ right eye, this time deciding he had sustained enough punishment. Ugas screamed in dismay, clearly wanting to continue, while Spence shouted to the rafters in pure joy and stomped his feet on the canvas. 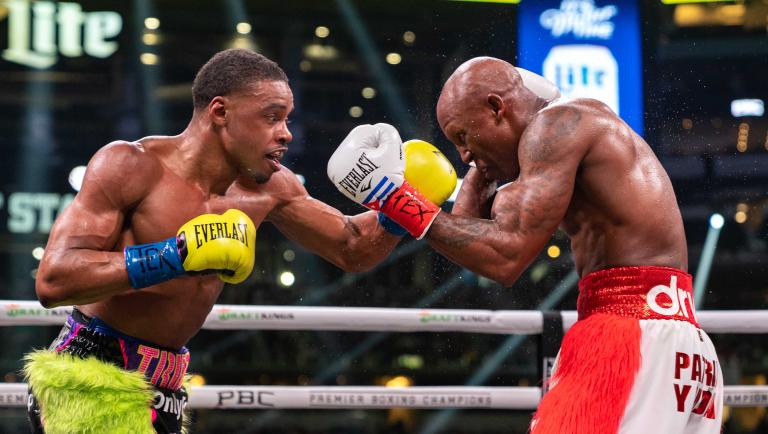