Sammy Vasquez continued his ascent in the 147-pound division with a whirlwind performance that took down Jose Lopez in the fifth round.

Left! .. Left! ... Left, right, left!: “Sergeant” Sammy Vasquez marched all over the face of Jose Lopez, but with his fists in place of his feet.

Vasquez confused Lopez by coming at him at multiple angles and controlling the distance of the fight, and battered his opponent with well-timed left hooks and hard uppercuts.

Lopez kept bulldozing forward, eager to engage and wanting to brawl, but Vasquez was too slick and crafty, juking and jiving out of harm’s way while countering with steady accuracy. It was the difference between a machine gun’s wild spray and the precise fire of a sniper’s rifle.

Although he was in control the whole fight, Vasquez really started to dominate in Round 4, when he landed a head-swiveling fusillade of blows in the center of the ring.

In the fifth, Vasquez dropped Lopez with whipsaw punching. Lopez beat the count, but it was he who was truly beaten, as referee Gary Rosato would soon stop the fight, resulting in a TKO victory for the undefeated Vasquez. 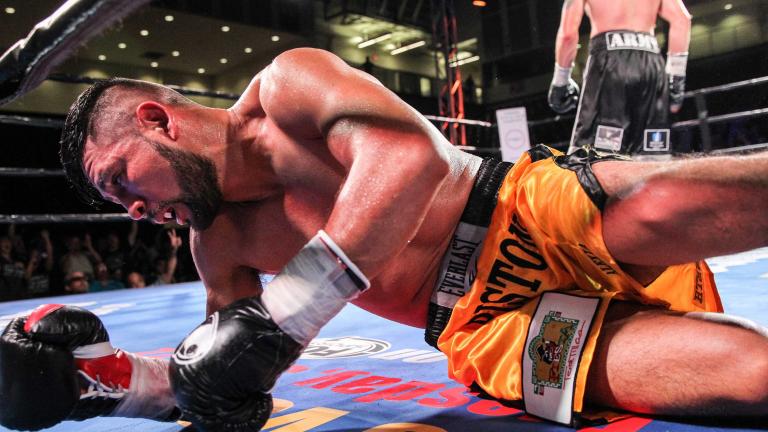 Left! ... Left! ... Left, right, left!: “Sergeant” Sammy Vasquez marched all over Jose Lopez on Tuesday, but with his fists in place of his feet.

His last time out, Sammy Vasquez made a rare appearance outside of Pennsylvania to face one of the stiffest tests of his career. New venue, new caliber of opponent, no problem as Vasquez overcame Wale Omotoso at the MGM Grand Garden Arena in Las Vegas with 98-92 scores on all three judges’ cards.