When Marcello Matano weighed in at a recorded career-low 150.4 pounds for Saturday’s 154-pound fight with Julian Williams, trainer Stephen Edwards expressed concern for the Italian fighter: “That’s too small; he’s gonna get hurt.” 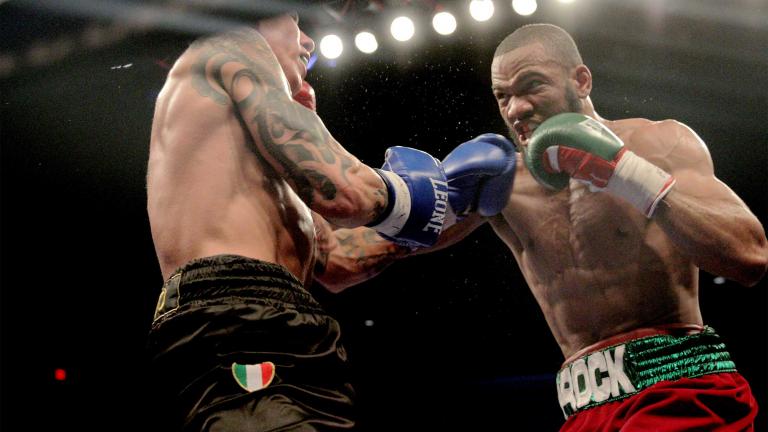 Julian Williams connects with a right to the jaw of Marcello Matano during Saturday's 154-pound fight in Bethlehem, Pennsylvania. Williams won by seventh-round TKO to put himself in position for a title fight. (Amanda Wescott/Showtime)

Williams (22-0-1, 14 KOS) made his cornerman a prophet at the Sands Event Center in Bethlehem, Pennsylvania. After picking Matano (16-2, 5 KOs) apart through six one-sided rounds, Williams (22-0-1, 14 KOs) unleashed a vicious assault of unanswered punches in Round 7, leading referee Gary Rosato to step in and end the bout at the 2:24 mark.

In securing his 10th stoppage victory in his last 13 fights—and his third in a row—Williams became the mandatory challenger to titleholder Jermall Charlo (23-0, 18 KOs) of Houston.

Edwards said the plan from the outset was to work the jab as well as the body in hopes of breaking down Matano and ultimately looking for the big counter-punch shot, which on Saturday was the left hook.

It took a few rounds before Williams began to attack Matano’s midsection, but otherwise the plan worked to perfection. The 25-year-old Philadelphia native hit the mark consistently with his jab and connected on more than half of his power punches against the awkward, come-forward Matano, who was making his first appearance on U.S. soil.

Williams got in a lot more work Saturday than he did in his last fight September 22, when he needed just 93 seconds to stop veteran Luciano Cuello, which also took place at the Sands Event Center. But the 29-year-old Matano, who entered the bout on a four-fight winning streak, never came close to hurting “J-Rock,” as his long, looping punches rarely found home.

With Matano dispatched, Williams now finds himself on the verge of achieving his lifelong goal of fighting for a world title.

Julian Williams stays on target with stoppage of Marcello Matano

Julian Williams was businesslike in his dismantling of Marcello Matano on Saturday night, but things got more personal after the Philadelphia native earned his first shot at a world title.

Think about your ultimate lifelong goal—the one thing you’ve been working for years to achieve. Now imagine being one step away from it. Of course the imminent accomplishment would be front of mind 24/7. Unless you were Julian Williams.

With each vicious knockout, Julian Williams may have done as much harm to himself as his foes

From the moment they first lace up the gloves, boxers are taught a very simple, very important lesson: If you can take your opponent out, you take him out. Julian Williams was the living embodiment of this lesson in his last fight.