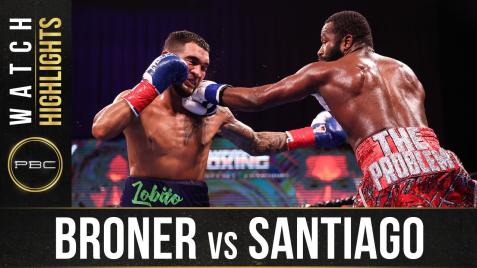 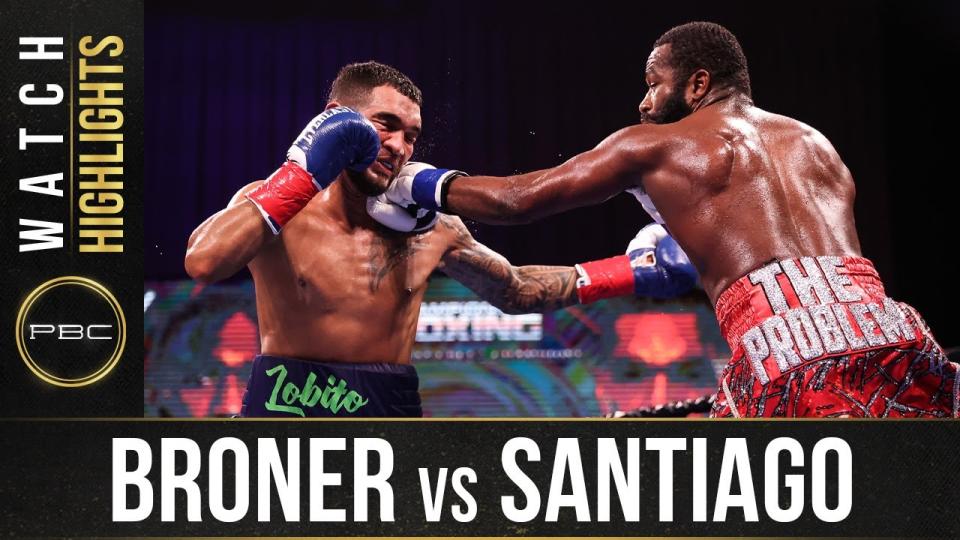 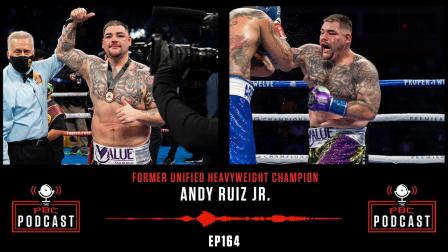 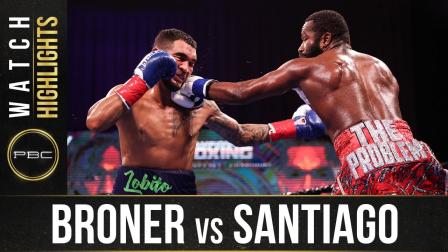 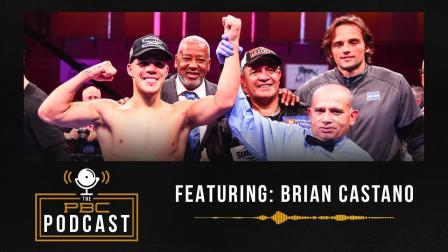 Some of the finest moments in the career of the four-division champ ahead of his showdown against Omar Figueroa Saturday night on SHOWTIME.

The former four-division champion shakes off two years of rust with a unanimous decision victory Saturday night on SHOWTIME.

A look back at the four-division world champion's finest moments as he prepares to return to the ring this Saturday night against Jovanie Santiago on SHOWTIME.

Adrien Broner Eric Ricker by NC in Round 2 of 4

Adrien Broner became a three-division world champion by the age of 23. The flamboyant Cincinnati native, who started boxing when he was 6 years old, says the sport saved him from a life on the streets. Blessed with both power and speed, “The Problem” has since conquered a fourth weight class at 140 pounds and now looks to regain his spot at the top of the division.

Broner is confident and flashy inside and outside of the ring.

The Cincinnati native has backed up that bravado, too, winning world titles in three weight classes (130 pounds, 135 pounds, 147 pounds) by the age of 23.

Broner’s father introduced Adrien and his twin brother, Andre, to boxing when they were 6 years old.

Adrien received the nickname “The Problem” from his parents, who struggled to keep their son’s behavior in check.

Broner became involved with gangs at a young age, and credits boxing from pulling him away from that lifestyle.

Experienced at an early age

As an amateur, Broner compiled a record of 300-19, winning the National Silver Gloves championship in 2002 and ’03, and earning the bronze medal at the 2005 National Junior Olympics.

Broner made his pro debut in his hometown in May 2008 at the age of 19, knocking out Allante Davis in 32 seconds.

The hard-hitting Broner won his first 21 fights, 17 by KO, to earn his first title shot.

He knocked out Vicente Martin Rodriguez in the third round in Cincinnati on November 26, 2011, to claim the vacant title at 130 pounds.

Broner defended his belt with a fourth-round TKO of Eloy Perez in St. Louis in February 2012, but relinquished his title for failing to make the 130-pound weight limit for his July 2012 fight against Vicente Escobedo, whom Broner defeated by fifth-round TKO.

A champion at any weight

In November 2012, Broner made his 135-pound debut in a title fight against Antonio DeMarco in Atlantic City, New Jersey.

Using his power, speed and defense to frustrate DeMarco, Broner hurt the champ with a quick combination in the eighth before flooring him with a left uppercut.

DeMarco’s corner stopped the fight after the knockdown, giving Broner his second world title in as many weight classes.

After winning his February 2013 title defense against Gavin Rees by fifth-round TKO, Broner moved up two weight classes to challenge 147-pound champion Paulie Malignaggi for his title in Brooklyn, New York, in June.

Broner outboxed Malignaggi to win a 12-round split decision, giving him three world titles in three weight classes in less than two years.

Tasting defeat for the first time

Broner suffered his first professional loss in his first 147-pound title defense, dropping a 12-round unanimous decision to Marcos Maidana in San Antonio, Texas, in December 2013.

Broner, who entered the bout as a 5-to-1 betting favorite, was knocked down for the first time in his career in the second and eighth rounds, and the fight was named The Ring’s Upset of the Year.

“I believe I showed a lot more in that fight, taking that loss, than I did in my biggest wins,” he told Yahoo! Sports. “I got off the canvas and turned the fight around. I fought my ass off when it would have been easy for me to go, ‘Oh, this isn’t my night. Maybe next time.’ I didn’t do that. I fought.

Broner dropped to 140 pounds for his next fight, winning a 10-round unanimous decision over Carlos Molina in Las Vegas in May 2014.

He won a 12-round unanimous decision in September 2014, knocking down Emanuel Taylor in the final seconds of the final round to clinch the victory in Cincinnati.

Outside of the ring, Broner is a part-time rapper, having cut tracks with Soulja Boy and Rick Ross.

But the father of six doesn’t plan on hanging up his gloves anytime soon.

“I’ve already done some great things,” Broner told DoghouseBoxing.com. “They say guys like me don’t come along again for 50 or 60 years.”

Winning impressively in his PBC debut

Broner won the first bout in Premier Boxing Champions history, earning a 12-round unanimous decision over John Molina Jr. at the MGM Grand Garden Arena in Las Vegas on March 7, 2015.

Fighting before a national television audience in prime time on NBC, Broner was dominant as he won nearly every round on all three judges' cards.

With the win, Broner took another step toward winning a world title in his fourth different weight division.

Coming up short against Porter

Broner returned to the ring in a 144-pound catchweight fight against Shawn Porter at the MGM Grand Garden Arena in Las Vegas on June 20, 2015, in a prime-time headlining bout on NBC.

Broner started slowly in the Battle for Ohio as Porter pressed the action and backed Broner against the ropes in the early rounds.

Broner battled back in the middle rounds and caught Porter with some clean shots. After being warned repeatedly by referee Tony Weeks for holding, Broner was finally docked a point in Round 11.

Broner rallied in the 12th round and knocked Porter to the canvas with a clean left hook.

The knockdown was not enough to pull out the victory, though, as Porter won a unanimous decision.

Broner rebounded from the Porter loss on October 3, 2015, in a 140-pound bout against Russian two-time world title challenger, Khabib Allakhverdiev. Broner won via 12th-round TKO, earning the vacant WBA crown and his fourth title in as many divisions.

Not only did Broner become the first man to stop the tough Allakhverdiev, he ended his own 32-month knockout drought in doing so.

Broner would lose the title at the scales prior to his April 2016 bout versus Ashley Theophane. Broner scored a ninth-round TKO over Theophane.

In February 2017, Broner returned to his native Cincinnati to face dangerous brawler Adrien Granados in a welterweight bout at the Cintas Center.

The familiarity between both fighters—who not only had a sparring history but are close friends—was evident from the outset. Knowing Broner had struggled in the past with aggressive opponents, Granados immediately pressed the action and continued to do so for virtually the entire 10 rounds.

Broner, however, was more than ready for Granados’ come-forward tactics, answering his fellow 27-year-old foe’s aggression with well-timed counterpunches, namely a right uppercut and left hook that frequently hit the mark.

Broner finished the see-saw battle strong, winning a 10-round split decision. Judges Steve Weisfeld (97-93) and Robert Pope (96-94) scored the contest in favor of Broner, while judge Phil Rogers had it 97-93 for Granados.

A CHANGE WAS IN ORDER

In July 2017, Broner moved down to 140-pounds to face the undefeated, future four-division champion Mikey Garcia in a non-title bout. Broner came up short, losing a unanimous, 12-round decision.

The loss compelled Broner to shake things up. He brought in the respected Kevin Cunningham to work alongside long-time trainer Mike Stafford.

The result was an action-packed, crowd-pleasing draw with two-division champion Jessie Vargas in a 144-pound bout on April 21, 2018. Broner’s winning score of 115-113 was overruled by two of 114-114, setting him up for a clash with eight-division champion Manny Pacquiao on January 19, 2019.

On January 19, 2019, Broner took on the legendary Manny Pacquiao in a welterweight title bout at MGM Grand in Las Vegas, live on SHOWTIME pay-per-view. The 29-year-old Broner had his moments during a unanimous decision loss to Pacquiao.

On February 20, 2021, Broner ended a two-year layoff versus Jovanie Santiago in a welterweight bout headlining a SHOWTIME Championship Boxing triple-header. Broner shook off the ring rust to take over and dominate down the stretch, winning a unanimous decision.

Broner started slowly but used the second half of the fight to surge ahead on the judges’ scorecards. The fight was scored 116-111, 117-110 and 115-112 and all three judges had Broner winning rounds seven through ten.

Cincinnati’s Broner landed just 35 of 138 punches in the opening six rounds of the fight while the previously undefeated Santiago (14-1-1, 10 KOs) landed 93 of 305 during the same stretch. At the end of the fourth round, Santiago was deducted a point for a punch that landed after the bell. Over the final six frames, Broner landed 63 of 300 punches while Santiago landed 114 of 392. Broner was most active in the ninth round when he connected on 14 of 38 punches. Though outworked over the entirety of the fight, Broner landed quality punches over the second half of the bout which earned him the victory.