Boxing's only eight-division world champion, Manny Pacquiao aims to make the biggest fights possible to entertain his large fan base as he continues his Hall of Fame career. Read Bio 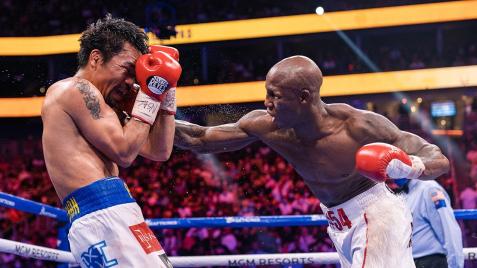 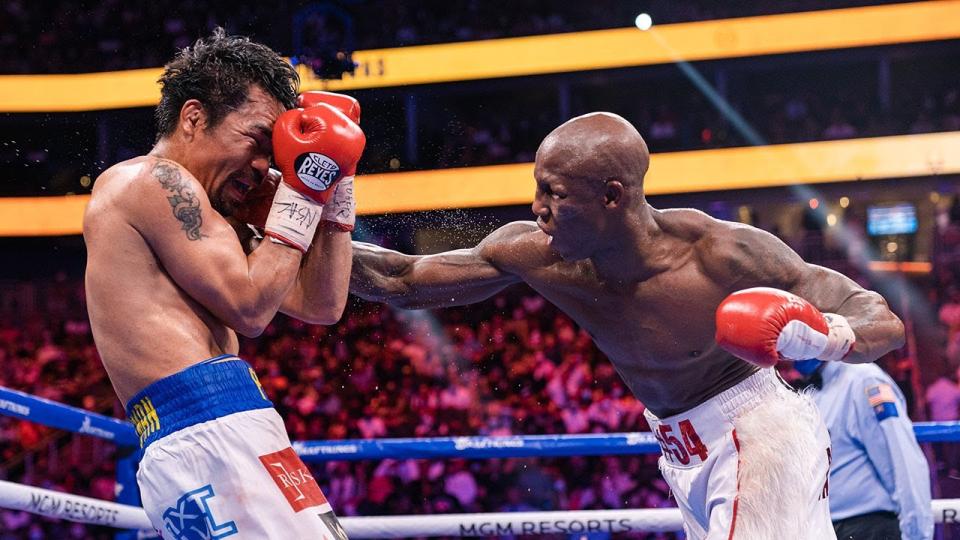 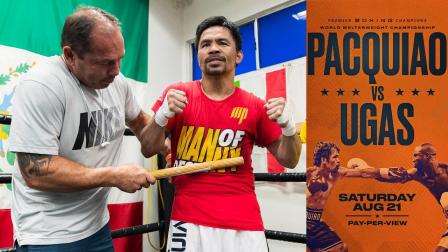 No Pain, No Gain! Manny Pacquiao Works on His Pain Tolerance Ahead of Ugas Clash click here to get video transcript 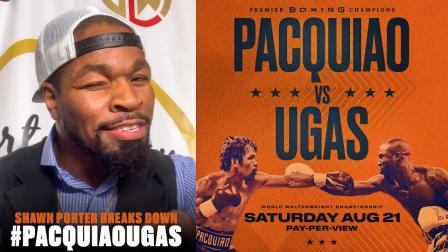 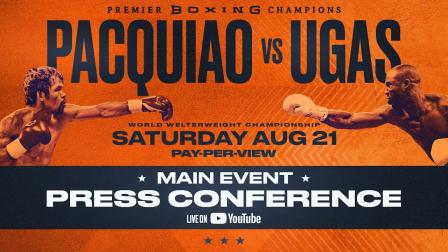 Boxing's only eight-division champion and sure-fire future Hall of Famer announced his retirement on Tuesday during a video he posted on social media.

The smooth-boxing Cuban outboxes and out-brawls one of boxing's icons to retain his world welterweight title Saturday night on pay-per-view.

Pacquiao Decisions Thurman in a Thriller

Boxing's only eight-division champion is back on top, claiming the WBA Super World Welterweight title in a furious Fight of the Year candidate on PBC on FOX Sports PPV.

Manny Pacquiao’s humble demeanor and unforgiving fists have transformed him into a boxing legend, international superstar and Philippines Senator. He's showing no signs of slowing down as he prepares to face WBA World Welterweight Champion Yordenis Ugas Saturday, August 21, on FOX Sports PPV.

A STAR IS BORN

Born Emmanuel Dapidran Pacquiao on December 17, 1978 in General Santos City, Philippines to Rosalio and Dionesia Dapidran-Pacquiao, a 14-year-old Pacquiao left his family on a ship to Manila. There, the youth survived on the streets for a short time before turning to boxing. He posted a 60-4 amateur record as a member of the Philippines’ National Team.

A 16-year-old Pacquiao made his professional debut on January 22, 1995 at 106-pounds with a four-round unanimous decision over Edmund Enting Ignacio. Pacquiao won his next 10 bouts, including four by stoppage, to improve 11-0. In February 1996, Pacquiao lost for the first time, a third-round TKO loss to Rustico Torrecampo in a 112-pound bout.

After two defenses, both knockout wins, Pacquiao lost the crown at the scales in advance of a third-round TKO loss to undefeated Boonsai Singurat in September 1999.

Pacquiao then went 6-0-2, all wins by knockout, in his next eight fights. The run included four title defenses and a six-round technical draw with Agapito Sanchez in November 2001 due to a cut over Pacquiao’s right eye.

Pacquiao scored a fifth-round TKO of Serikzhan Yeshmagambetov in a non-title, 126-pound (featherweight) bout in March 2003 and, in his final 122-pound defense, won via third-round TKO over previously unbeaten Emanuel Lucero in July 2003.

A RUN FOR THE AGES

In November 2003, Pacquiao scored an 11th-round knockout of Mexican lineal featherweight world champion Marco Antonio Barrera in San Antonio, Texas. In triumph, Pacquiao became a title winner in a third weight class – the first Filipino and Asian boxer to do so – and became a pound-for-pound entrant.

May 8, 2004, marked Pacquiao’s first of four fights against Juan Manuel Marquez, a Mexican legend and holder of the IBF/WBA featherweight championships. Marquez battled back from three first-round knockdowns to retain his belts via split draw at the MGM Grand Garden Arena in Las Vegas.

Pacquiao resumed his knockout ways with a fourth-round TKO of Narongrit Pirang that December.

Pacquiao rose to junior lightweight (130-pounds) and went 7-1 (4 KOs) over his next eight fights. The run included going 2-1 against four-division champion Erik Morales of Mexico, split- and unanimous decisions over Marquez and Barrera, and an eighth-round TKO of previously unbeaten Mexican Jorge Solis.

In his junior lightweight debut on March 19, 2005, Pacquiao lost a unanimous decision to Morales at the MGM in Las Vegas. Pacquiao rebounded, however, with a sixth-round TKO of Hector Velazquez that September.

In his return bout against Morales on January 21, 2006, at The Thomas & Mack Center in Las Vegas, Pacquiao scored two knockdowns on the way to a 10th-round TKO victory and the first stoppage loss of Morales’ career.

Following a unanimous decision over Oscar Larios in July 2006, Pacquiao faced Morales a third and final time at the Thomas & Mack that November. This time, Pacquiao dominated Morales by third-round TKO. Pacquiao was named the 2006 “Fighter of The Year” by The Boxing Writers’ Association of America (BWAA).

After defeating Solis, Pacquiao won a wide decision over Barrera on October 7, 2007, setting up his rematch with Marquez on May 15, 2008, in Las Vegas. This time, Pacquiao dropped Marquez in the third round on the way to dethroning him as WBC junior lightweight champion by split decision.

In doing so, Pacquiao earned his fourth crown in as many divisions as well as and lineal crowns for the weight class. Pacquiao then vacated the championship for a one-fight appearance at lightweight (135-pounds).

Pacquiao was now 34-1 with 17 knockouts. On June 28, 2008, he dethroned WBC lightweight champion David Diaz by ninth-round TKO to win a world title in his fifth weight class.

On December 6, 2008, Pacquiao debuted as a welterweight (147-pounds) at the MGM Grand against six-division champion Oscar De La Hoya.

Despite weighing only 142 pounds compared to his rival’s 145, Pacquiao’s double-fisted power hammered De La Hoya into submission for a sensational eighth-round stoppage.

Pacquiao was once again named “Fighter of The Year” by the BWAA.

BRING ON THE WELTERS

Pacquiao continued his march toward greatness at the MGM Grand on November 14, 2009, scoring two knockdowns as he dethroned Puerto Rico’s Miguel Cotto to capture the WBO welterweight (147-pounds) title via 12th-round TKO.

The punishing victory over Cotto earned Pacquiao’s record seventh title in as many divisions.

Pacquiao made one defense of his welterweight crown on March 13, 2010, posting a near shutout, unanimous decision over former champion Joshua Clottey in the first-ever boxing match at Dallas Cowboys’ Stadium in Arlington, Texas.

On November 13, 2010, Pacquiao returned to Cowboys Stadium and made history with a brutal beat-down and a unanimous decision over Mexican former titleholder Antonio Margarito for the WBC’s junior middleweight championship and a record eighth title in as many divisions.

The contract called for the heavy-handed Margarito to weigh no more than 150. Yet despite his out-weighing Pacquiao, 144.6-to-150 on the pre-fight scales, and rehydrating to 165 to Pacquiao’s 148 by fight time, Margarito left the ring bruised, bloodied and disfigured, with a broken orbital bone in a right eye that was nearly swollen shut.

BOUNCING BACK YET AGAIN

Pacquiao returned to the MGM for his third and fourth WBO 147-pound title defenses by unanimous and majority decision over two-division champion Shane Mosley (May 7, 2011) and Marquez (November 12, 2011).

Pacquiao suffered defeat during his next two trips to the MGM in 2012, first by split-decision to unbeaten American Timothy Bradley, who dethroned him as WBO welterweight titlist on June 9, and, second, via sixth round knockout against Marquez in their non-title final meeting on September 8.

Bradley won by disputed scores of 115-113 twice, with the same score going to Pacquiao on the third judges’ card. But Marquez dropped Pacquiao in the third round and rose from a fifth-round knockdown before knocking out his archrival in the sixth.

In “The Fight of The Century” on May 2, 2015, at the MGM Grand, Floyd Mayweather Jr. put his WBA and WBC titles on the line against Pacquiao’s WBO crown.

Mayweather dominated the bout with a display of speed, guile and general wizardry, scarcely allowing a game Pacquiao to land effective blows on the way to a unanimous decision victory (116-112, twice, 118-110).

Pacquiao bounced back for consecutive unanimous decisions victories in April and November 2016 over Bradley and two-division title winner Jessie Vargas. “The Pac Man” scored a second-round knockdown against Vargas to regain the WBO crown, only to be dethroned on foreign soil by controversial unanimous decision against Australia's Jeff Horn in July 2017.

But on July 15, the 39-year-old Pacquiao became a champion a 10th time—third as a welterweight—with a three-knockdown, seventh-round TKO over WBA titlist Lucas Matthysse.  In victory, Pacquiao restored himself as a force in a deep and talented 147-pound division.

“I’m still here in this sport,” Pacquiao said afterward. “At the age of 40, I can still give my best.”

On July 20, 2019, Pacquiao showed the world, once again, why he is one of the greatest to ever don a pair of boxing gloves as he took on undefeated WBA Super World Welterweight Champion Keith “One Time” Thurman (29-0, 22 KOs) in a 147-pound super-fight. The bout headlined a Premier Boxing Champions on FOX PPV, live from the MGM Grand in Las Vegas.

A sell-out crowd of 14,356 witnessed a historical night as Pacquiao turned in one of the finest performances of his career, dethroning Thurman by 12-round split decision in a Fight of the Year candidate.

The scorecards reflected the torrid back and forth action in the ring.

Pacquiao (62-7-2, 39 KOs) landed less (113), but his punches seemed to carry greater effect, evidenced by the left to the solar plexus followed by the straight right upstairs that dropped Thurman late in the opening round. It was the first knockdown of the champion’s career.

Thurman rose to his feet wearing a sheepish grin, but he wasn’t entirely out of trouble. Pacquiao’s blazing lefty hands and feet allowed him to land combinations, step to the side and land some more.

Thurman began finding his footing in the third, inching forward behind the jab and working Pacquiao’s body. He carried that momentum until midway through the fifth, when a hard Pacquiao right hook left Thurman’s nose bruised and bloody. Yet “One Time” continued to come forward, backing Pacquiao up in the sixth and landed several rights to the head.

By the end of the seventh, the momentum had completely shifted. Thurman was now in control, landing his right to the head and body with regularity. Pacquiao wasn’t flurrying as often. The partisan crowd began encouraging him, shouting “Manny! Manny! Manny!” during the ninth.

“Pac Man” came alive in the 10th, badly hurting Thurman with a left cross to the ribs. Pacquiao pounced, landing another left downstairs that bent Thurman over. The Senator from the Philippines sought to close the show but Thurman showed some savvy, fighting him off to make it out of the round and to the final bell.

"It was fun,” Pacquiao said afterward. “My opponent is a good fighter and boxer. He was strong.”

Saying Goodbye to a Legend

Already considered one of the greatest to ever do it, Pacquiao set out to prove that he stood alone as the Greatest of All TIme.  The 42-year-old legend was originally slated to face undefeated, unified World Welterweight Champion Errol Spence Jr. on Saturday, August 21, 2021, at T-Mobile Arena, live on FOX Sports PPV. Spence, however, withdrew with an eye injury. WBA World Welterweight Champion Yordenis Ugas answered the call to take on Pacquiao.

However, Ugas was able to outbox Pacquiao over 12 rounds to win a unanimous decision and retain his world title. Pacquiao fought a determined fight but ultimately fell short.

Weeks later, the great Pacquiao would announce his retirement, drawing the curtain on his legendary boxing career which included 12 world titles over a record eight weight divisions.  In 2019, Manny, at age 40, became the oldest man to win a welterweight title. He held at least one world title over the last four decades dating back to the '90s.

“I'm very excited about this new chapter in my career.”