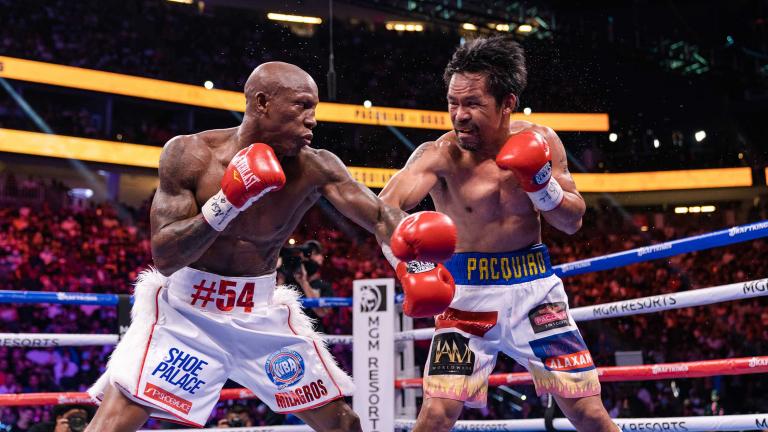 LAS VEGAS – In a career-defining fight, Yordenis Ugas shone bright on the biggest of stages.

A boisterous crowd of 17,438 at T-Mobile Arena in Las Vegas watched the underdog Ugas outbox and out-fight the great Manny Pacquiao to win a 12-round unanimous decision and retain his WBA Welterweight World title in the main event of FOX Sports PBC pay-per-view.

Pacquiao, as always, was gracious in defeat.

Ugas used his size, strength and length to keep Pacquiao guessing, slowly wearing down boxing’s only eight-division champ to win in decisive fashion.

Pacquiao, 42, 67-8-2 (39 KOs), promised a fast start and lived up to his word in the first, darting in and out with combinations. Unfazed, the 35-year-old Ugas (27-4, 12 KOs) maintained a tight guard. In the second, he unveiled his long left jab, alternating it up and downstairs as Pacquiao struggled to get inside.

Pacquiao began the third with a short left but Ugas silenced the crowd with power shots of his own. The Cuban began landing a looping right in the fourth, a punch Pacquiao struggled with the entire night.

Following a close fifth, Ugas regained the upper hand in the sixth, working the jab and delivering well-placed punches to the body. Two-way action brought the crowd to their feet in the seventh as they shouted “Manny! Manny! Manny!” Ugas remained poised, pushing the Philippine Senator back with more rights.

Ugas controlled the eighth, eliciting “ooh’s and ahh’s” from the audience with several more punishing rights. Sensing the fight slipping away, Pacquiao picked up the pace in the ninth. Still, the harder shots came from Ugas.

Early in the 10th, a Pacquiao left forced Ugas to clinch. The momentum was short-lived. Ugas had now found a home for his right and was throwing it with regularity. The 12th was particularly one-sided. Ugas repeatedly landed the right, hurting Pacquiao on several occasions and opening a cut near his left eye.

The triumphant Ugas raised in his arms in victory as the bell sounded. Moments later, three judges scored the bout in his favor, one turning in a 115-113 card while the other two had it 116-112.