Argentina’s Fernando Martinez punished Jerwin Ancajas over 12 rounds to wrest away his IBF junior bantamweight title via a unanimous decision. 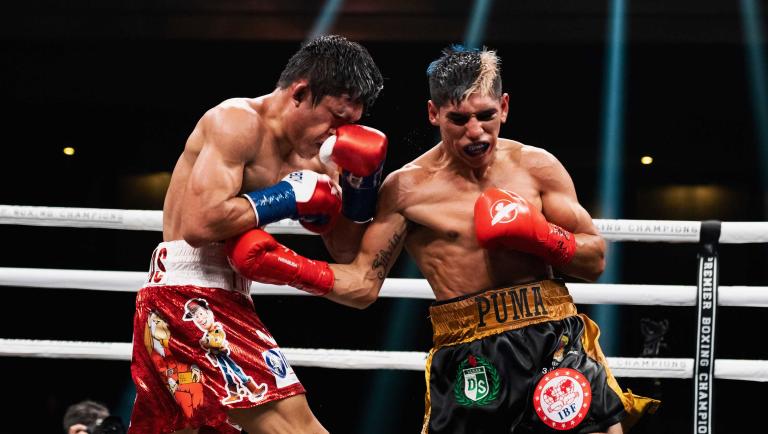 With his promoter, the former two-division champion Marcos Maidana urging him on from ringside, Argentina’s Fernando Martinez punished Jerwin Ancajas over 12 rounds to wrest away his IBF junior bantamweight title via a unanimous decision in a star-making performance in the SHOWTIME telecast opener.

After exchanging hugs, handshakes, and pleasantries during the final press conference on Thursday, Martinez (14-0, 8 KOs) and Ancajas (33-2-2, 22 KOs) dispensed with the niceness and engaged in an action-packed thriller.

Martinez, whose father died while he was in the amateurs and helped introduce him to boxing, fought back tears as he expressed what the win meant to him.

“This moment is so special to me,” said Martinez. “It hurts so much that my father’s not here for this great moment in my life, but I know that he oversaw this. I’m so happy for my corner and for the people who supported me over the years. I want to thank SHOWTIME for their support. I want to thank Jerwin for giving me this opportunity. I am so thankful for this.”

Martinez landed 421 power shots, a new division record and 427 total punches, forcing Ancajas to be taken to the hospital as a precaution following the match.
“I am so thankful for team Martinez to give me this opportunity to make this fight,” Ancajas said. “Yes, I want the rematch and I’ll do everything to achieve my goal. I learned a lot in this fight and he’s a great challenger.”

The two continuously walked through hellacious punches throughout the action. But it was Martinez who hurt Ancajas more than the champion and in between the ninth and tenth rounds, Ancajas’ corner was asking him if he was okay to continue. Ancajas responded by buckling Martinez in the 10th round with a right hand, and he buzzed Martinez again with a straight left only for Martinez to fire back with roundhouse punches of his own in a snapshot of the non-stop action that took place.