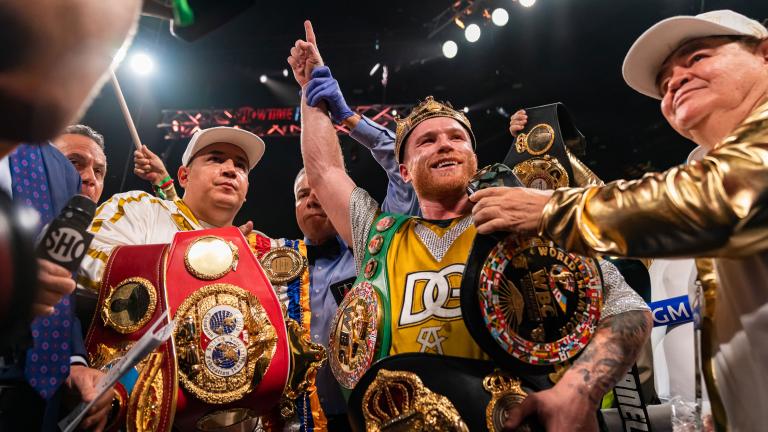 “It hasn’t been easy to get to this point, but with your support, my family and my team we’ve gotten really far,” Álvarez told SHOWTIME’s Jim Gray (through a translator) following the historic victory. “This is for everybody, especially for Mexico. This is another one for our team. We did it tonight.”

After months of an intense buildup to the fight and ten rounds of back-and-forth action in the ring, the fight came to a dramatic end in the 11th round. Canelo connected flush on a left hook that signaled the beginning of the end for Plant, who fought valiantly in his pay-per-view main event debut. Canelo (57-1-2, 39 KOs) followed up the left hook with a huge right uppercut that sent Plant to the canvas for the first time in his career. Plant (21-1, 12 KOs) returned to his feet, but was never able to recover. Canelo pounced on his injured opponent, unleashing a barrage of power shots that again floored Plant. This time, referee Russell Mora stepped in to put an end to the action at 1:05 of the 11th.

“Caleb is a good fighter,” said Canelo, who shared words of encouragement for his opponent in the ring following the fight. “I have a lot of respect for Caleb Plant. He was a difficult opponent with a lot of ability and I do respect him. We are both men at the end of the day. He wanted to fight me and still continue. I told him there’s no shame. We had a great fight tonight.”

The future Hall of Famer Canelo, 31, already a four-division world champion, slowly broke Plant down over the course of the fight with a steady diet of body shots. 53 of his 117 landed punches were to the body and he landed 40 percent of his power shots. Canelo closed the show landing 9 of 14 power shots in the 11th round.

Following the bout, Plant was taken to University Medical Center as a precaution.

In the co-main event, Flint, Michigan’s Anthony Dirrell (34-2-2, 25 KOs) scored a stunning, highlight-reel knockout of Marcos Hernandez (15-5-2, 3 KOs) just seconds into the fourth-round. irrell wound up and unleashed a vicious right uppercut to send Hernandez flat on his back and score the one-punch KO. Hernandez beat the 10-count, but referee Celestino Ruiz called off the fight when the clearly injured and wobbly fighter rose to his feet.

“It was a spectacular knockout,” said Dirrell. “It was a punch we were working on. It wasn’t that wide. I used to use that punch way back when. I came up with the shot and he never saw it coming. My brother [Andre] was yelling at me and I said, ‘I got it.’ I saw it and I had to take advantage of it. I had to take it away from him.”

Dirrell, the former super middleweight titleholder, successfully rebounded from the disappointing draw against Kyrone Davis in February, and did so stylishly. The 37-year-old even capped off the KO with a celebratory backflip. Prior to that pivotal punch, Hernandez held a slight 46-40 edge in punches landed.

Former WBC Super Bantamweight World Champion Rey Vargas (35-0, 22 KOs) showed no signs of ring rust in his first fight in over two years, cruising to a unanimous decision over Leonardo Báez (21-5, 12 KOs) in a Mexico vs. Mexico matchup in the second fight of the telecast. Two judges scored the fight a shutout, 100-90, while the third judge scored it 99-91.

Fighting for the first time at 126 pounds, Vargas used his significant height and reach advantage to dictate the pace of the entire matchup. Vargas’ vicious body attack – he landed 71 body shots in the ten-round fight – broke down the much smaller and overmatched Báez, whose awkward style led to several accidental head clashes throughout the bout.

“We knew what we were in for,” said the 30-year-old Vargas. “We were prepared for a strong fighter. And we planned to outbox him. We had a lot of good exchanges and there were moments when I stood in front of him and landed my punches. I’m more of a technical fighter and not a brawler. The plan was to fight and to box and punch without getting punched. I had to stand there and throw big punches. But that’s part of the game.”

Already a former champion at 122 pounds, Vargas now has his sights set on becoming a two-division champion. “I was surprised he went the entire distance. He’s a good fighter and I don’t take anything away from him. I’m looking forward to my next fight being for a world title.”

In the opening bout of the SHOWTIME PPV telecast, the hard-hitting Elvis Rodriguez (12-1-1, 11 KOs) bounced back from his first career loss in scintillating fashion, scoring a fifth-round knockout over the previously undefeated Juan Pablo Romero (14-1, 9 KOs) in a super lightweight bout scheduled for 10 rounds. Watch the stoppage HERE:

The Dominican southpaw Rodríguez landed a straight left hand that sent Romero to the canvas for the second time in the fight, and the second time in his career, at 2:49 in the fifth round. Resigned to defeat, Romero sat and watched as referee Robert Hoyle reached the count of 10. Rodríguez’s powerful left hand was also responsible for flooring Romero in the fourth round.

“I am fully aware that I started out slow in the first two rounds, but then I saw signs of wear and tear on his face and I gained the upper hand,” said the 25-year-old Rodríguez, who is trained by Hall of Famer Freddie Roach. “Romero is a fast starter by nature, but I’m the other way around. Then I was able to straighten out.”

After his slow start, Rodríguez out-landed Romero 47-36 in the fourth and fifth rounds. 159 of the 169 combined landed punches in the slugfest were power shots.

“I've got to give my opponent credit, it’s never just about you,” said the 31-year-old Romero, who represented Mexico in the 2016 Olympics. “I decided to not put my health on the line anymore in order to come back and fight again in the future. Tonight just wasn’t my night.

“The division already knows who I am after having seen most of my fights,” Rodríguez added. “I suffered a little setback, but I think that everyone knows that Elvis Rodríguez brings powerful, quality punches in each fight.”