Former amateur standout Elvis Rodriguez of the Dominican Republic is proving to be just as formidable in the pros. The southpaw prospect is on the ascent in the stacked super lightweight division. Read Bio 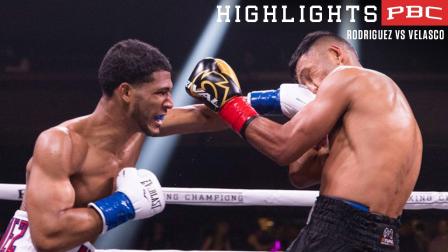 The unbeaten rising star overcomes a first-round knockdown and spirited effort from Gausha to win a unanimous decision in a PBC on SHOWTIME Saturday night headliner from Minneapolis.

Former amateur standout Elvis Rodriguez of the Dominican Republic is proving to be just as formidable in the pros. The southpaw prospect is on the ascent in the stacked super lightweight division.

Elvis Rodriguez vividly recalls how he was named.

“Elvis was my father’s favorite singer. My family had a painting of him in the living room,” said Rodriguez, the youngest of his parents’ three sons. “When my mother was pregnant with me and they were talking about what to name me, my brother pointed at the painting, and said, ‘why don’t you name the baby Elvis?”

Rodriguez was drawn to boxing as a child growing up in the city of Santo Domingo in the Dominican Republic, even as he played the country’s popular sport of baseball.

“When I  was young, I was on a little league team. I would always get into fights whenever someone tried to tag me,” Rodriguez said. “Or I would fight with other kids on my team for all sorts of reasons. So my coach would say jokingly ‘I think you’re in the wrong sport. You should be boxing.’”

“My father was a fanatic when it came to boxing. One fight that really caught my attention was the one between Felix Trinidad and Oscar De La Hoya,”  said Rodrugez, who, like Pacquiao, fights out of a southpaw stance.

“I remember that fight being on channel seven in the Dominican Republic. There were a lot of people in the house who were there to watch the fight with my father. I had a feeling it was a big event.”

A 14-year-old Rodriguez made the Dominican Republic’s National Team,leading to a record of 198-22 and appearances in the Pan American, Central America and International Games.

Rodriguez earned Cheo Aponte Tournament gold medals in Caguas, Puerto Rico, in 2012, 2015 and 2016 as well as in the 2014 Copa Guerrera Azteca tournament in Mexico.

Rodriguez earned a silver medal in the 2017 Continental Elite event in Honduras, placed fourth in both the 2015 Panamerican Games in Toronto and the 2017 World Championships in Hamburg, Germany, and was ranked as high as fifth in the world in 2018.

Freddie Roach And ‘The Dominican Kid’

Rodriguez came to Los Angeles where he began working with and earned the nickname, “The Dominican Kid,” from renowned trainer Freddie Roach and members of his  Wild Card Boxing Gym.

“I went over some drills and exercises to showcase myself in front of Freddie. Little by little, each day, we were working together. When I knocked out a guy that was 11-0 in sparring,” said Rodriuquez, who is managed by Ben Lieblien.

A 22-year-old Rodriguez debuted professionally with a third-round TKO of Valentin Juan Ortiz Hernandez in November 2018 before going 4-0-1 (4 KOs) the following year.

Rodriguez scored knockouts in  the first, second, third and fourth rounds in 2019, which included June’s accidental headbutt induced first-round draw with Joaquin Chavez due to a cut over his rival’s left eye.

First-round KO victim Jesus Gonzalez entered at 6-2 (2 KOs) but was stopped for the first time in August, as was previously unbeaten third-round KO casualty Ramon Mascarena, who entered their September bout at 6-0 (2 KOs).

“The Dominican Kid” rose to 10-0-1 (10 KOs) after stopping all five opponents in 2020 in within 15 rounds, and strikes a stance as if playing air guitar following victories “because that’s my Elvis Presley pose.”

The year began with February’s sixth-round TKO of Kaylyn Alfred, and included highlight-reel knockouts of Cody Wilson and Dennis Okoth both in July, Danny Murray in August, and Camron Krael in October.

A left hand flattened Murray for the second time in the fight, sprawling him to the canvas with concerns of a fractured orbital bone as the fight was stopped at 2:16 of Round One.

Okoth went down from a similar second-round straight left to the chin 19 days later on July 21, being dumped on his back and out as the referee waved an end to the bout at the 2:33 mark.

Rodriguez’s third-round stoppage of Wilson was the first of the loser’s career, and featured knockdowns in the first and final rounds. The initial knockdown was from a left hand, and the last, a right jab followed by a straight left that flattened Wilson to his back.

“This fight was for my mother,” said Rodriguez of Wilson, who entered at 9-2 (6 KOs). “Today is her birthday and I wanted to deliver a knockout win to her.”

The ‘Nuances’ Of Pro Boxing

“Heading into the Kenneth Sims fight I was coming off my first decision victory, which I dominated. But because I didn’t knock the guy out, people treated me as if I had lost.  I let the pressure get to me and I went in looking for and expecting the highlight reel knockout against Sims,” said Rodriguez.

“I was looking for one big shot. I learned a lot from Kenneth Sims. I wasn’t active enough. I should have been busier and set him up. I learned that you can’t knock everyone out, to let my hands go and be more active.  I also learned not to let peer pressure get to me. I should have gone in trying to win and let the knockout come.”

“Pro boxing is so different from amateur boxing, and I have learned so much from Freddie Roach. All of those nuances and differences I learned with him. I can’t get into specifics about what I’ve learned from Freddie because it’s really too much to name. I’m not the same fighter [I was] when I started out with Freddie. My defense and ring generalship have improved,” said Rodriguez.

“I am fully aware that I started out slow in the first two rounds against Romero, but then I saw signs of wear and tear on his face and I gained the upper hand. I suffered a little setback, but I think everyone knows that Elvis Rodríguez brings powerful, quality punches in each fight. The division already knows who I am after having seen most of my fights. I’ve improved a lot overall as a fighter.”

A SMOOTH STEP UP

On March 26, 2022, Rodriguez took another major step up in class, squaring off against veteran Juan Velasco in a PBC on SHOWTIME event from The Armory in Minneapolis, Minnesota. Rodriguez looked sensational, scoring a seventh-round knockout over Argentina’s Velasco (23-3, 14 KOs).

“I wasn’t surprised that I was able to dominate this fight,” said Rodriguez. “I was ready to demonstrate my skills with all of these fans here. I trained really well because I knew that Velasco was going to be a tough opponent.”

Rodriguez controlled the pace from the outset, circling his opponent and peppering him with combos from the southpaw stance. As Velasco continued to push forward, Rodriguez was able to slow his opponent’s counters with a consistent body attack.

Rodriguez used a prolific output of power punches to open up a cut and swelling around Velasco’s left eye. Sensing his advantage, Rodriguez pressed forward early in round seven and put Velasco down hard early in the frame. He remained patient with his follow-up attack, eventually finding a spot for a sweeping right hook that scored the second knockdown of the round. With one more flurry, and with Velasco unable to keep him at bay, Rodriguez delivered a left hand that put him down a third time, eventually prompting referee Gary Ritter to waive off the bout 2:49 into the round.

“I thought the fight was going to be over after I first knocked him down,” said Rodriguez. “But he did surprise me because he came back in that round. I just covered myself well for the remainder of that round and tried to take him out. I knew that he was having trouble with his eye. I could see that he was cut on the left eye and was also bleeding from his nose.

“I’m ready for anybody at 140 pounds. Gervonta Davis, Rolly Romero, whoever. I’m ready and prepared.”