Hard-hitting former world champion Brandon “The Heartbreaker” Figueroa (23-1-1, 18 KOs) returned to the win column with a dominant sixth round TKO of Carlos Castro (27-2, 12 KOs) in their WBC Featherweight Title Eliminator. 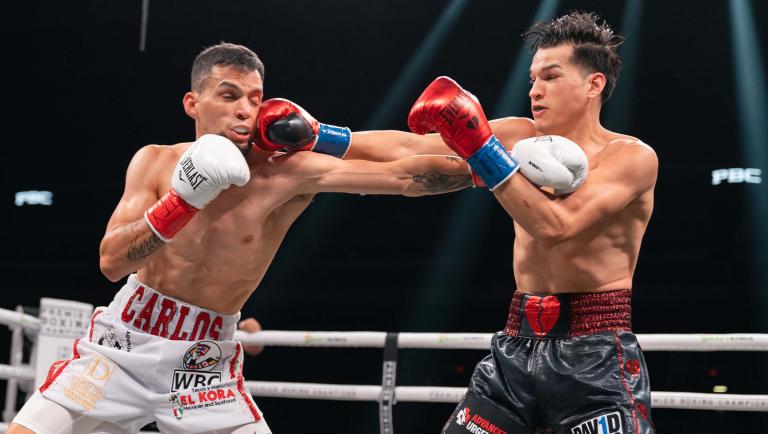 Competing in his first fight at featherweight, and first action since dropping a narrow decision in a 2021 Fight of the Year against Stephen Fulton Jr., Figueroa showed off his power at 126 pounds by dropping Castro midway through round three. Using his customary bruising come-forward style, Figueroa landed a looping overhand left that hurt Castro and eventually sent him to the mat on his follow-up (watch highlight HERE).

“I know Carlos Casto is a crafty fighter,” said Figueroa. “I had to be patient. I knew how to put the pressure on him, after the barrage of punches, I got tired and had to step back. I knew he was hurt. and I had him, and I had to put more pressure on him. I caught him clean with a good looping left hand and I had him, I just put punches together and I dropped him.”

A veteran who was also debuting at featherweight, Castro was able to use his ring IQ to weather the early storm from Figueroa. His short hooks on the inside and hard uppercuts kept Figueroa from overwhelming him in the third round and helped carry him through the early rounds.

Despite taking that return fire, Figueroa was undeterred and continued to stick to his game plan and bring the fight to Castro. In round six, Figueroa broke through again with a series of shots, including a violent, short right hook that stunned Castro.

“Carlos Castro has a lot of heart, he’s a proven fighter in the ring and I knew it would be hard to get him out of there,” said Figueroa. “I hurt him, I was waiting for that shot to the body, once I caught him clean, I knew he was hurt. I put my punches together again.”

Figueroa took advantage of the moment and unleashed a relentless attack on the ropes that went unanswered and forced referee Mark Nelson to jump in and end the bout 2:11 into the frame (watch highlight HERE).

“I’m pretty proud of myself,” said Figueroa. “I know there’s a lot of work ahead of me, especially if I fight the winner of the main event. I have to study my fight and get back to the gym.”