Sergey Lipinets put on a dominating performance over Omar Figueroa Jr. in their WBC super lightweight title eliminator, battering him for eight rounds before Figueroa's corner called off the fight, earning Lipinets the TKO victory. 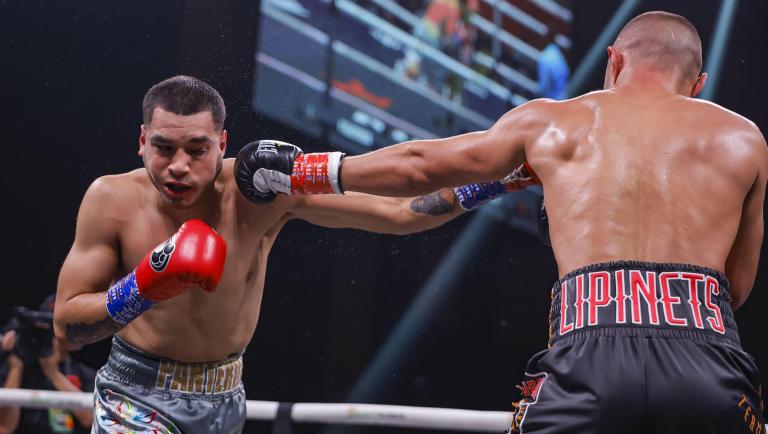 Lipinets, who took the fight on five days notice, floored Figueroa (28-3-1, 19 KOs) with a short, compact counter right hand with a minute left in the second round. Figueroa rose on shaky legs and Lipinets (17-2-1, 13 KOs) moved in and inflicted more punishment, round after round until the bout was stopped. Lipinets was initially penciled in to perform on the non-televised portion of the undercard, but was shifted to the main event when former four-time champion Adrien Broner withdrew from the matchup with Figueroa, citing mental health issues.

“I had a good fighter in front of me,” Lipinets said in the ring afterward. “My hat's off to Omar for being a warrior. The punch that rocked Omar is the punch that my trainer and I have been working on for a long time. He came at me and it was the perfect time to use it. I was too focused on protecting myself. I was concerned about him answering my punches, but it was not my job to stop the fight. 140 is my weight. I came back. I’m back.”

Lipinets held Figueroa to just 44 landed punches over eight rounds while landing 172 shots. Lipinets landed 46.7% of his power punches on his way to the 8th round TKO.

Once an aggressive, punishing fighter who overwhelmed his opponents with constant pressure, Figueroa suffered his third straight loss after also dropping a decision to Yordenis Ugas in 2019 and suffering a KO loss to Abel Ramos in May 2021 after his corner stopped the bout after the sixth round. Figueroa fought valiantly, even stunning Lipinets with a right hand midway through the sixth, but it was otherwise a resounding performance from Lipinets, who stamped his name as a player in the suddenly crowded super lightweight division. Lipinets hadn’t fought in 16 months since a sixth-round knockout loss to uber-talented welterweight Jaron Ennis, but the change in weight and opponent served him well.

“I’m very disappointed about the outcome,” Figueroa said. “My team and I worked so hard during this training camp. My body has reached its limit. I’ve been doing this for 27 years and my body has finally said enough. I’m just sorry I’ve disappointed the fans. The change of opponents didn’t affect me. I think I’ve reached the end of the line here in boxing. It occupied my life for 27 years. My body just gave up. It didn’t respond.”

In the run-up to Saturday’s fight, Figueroa emerged as an eloquent spokesperson for people struggling with mental health issues after he was diagnosed with his own set of mental health concerns. In the ring afterward, Figueroa reflected on his career, on the limitations of his athletic abilities and on the birth of his daughter earlier in the day.

“I’m happy that I got to enjoy this last camp. I had a great time,” he went on. “For everyone out there going through a tough time or in a dark place, I want to say, don’t you ever give up. Keep up the fight.”