Hector Garcia proved that his dominant win against Chris Colbert in February wasn’t a fluke. 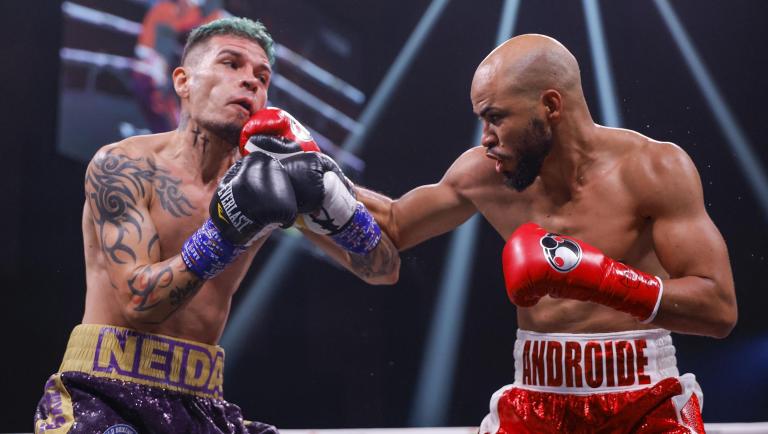 Garcia, a former Olympian from the Dominican Republic, dictated the action and survived a late rally to wrest the WBA Super Featherweight World Championship from Roger Gutierrez via a unanimous decision by scores of 117-111, 117-111 and 118-110 from Alexander Levin, Michael Ross and Fred Fluty to remain undefeated at 16-0 with 10 KOs.

“It means a lot to me to win this title,” Garcia said. “I dedicate it to my people, the entire Dominican Republic and my town, San Juan de la Maguana. In the pros, nobody knew me. But in the amateurs, people knew my name. I went to the Olympics – it was my dream. I had a good run. [Gutierrez] was looking for the right punch to take me down, but I was able to dominate, dictate the pace of the fight and get the win.”

After beating the previously undefeated Colbert as a late replacement on two-weeks-notice on February 26 when Gutierrez withdrew because of COVID, a focused and strategic Garcia kept Gutierrez on his back foot for most of the fight as he fed the titleholder a steady diet of up-jabs and hard lefts to rack up the first nine rounds on all three scorecards.

But Gutierrez, his hair tinted green and his left ear cut and bloody, stormed back in the later rounds, winning the final three frames on two of the judges’ scorecards as the southpaw Garcia appeared to tire and was squaring himself up. Gutierrez (26-4-1, 20 KOs) pushed Garcia back with right hands, his energy and punch-output surging. He appeared to hurt Garcia in the 11th round with a right as Garcia sagged against the ropes, but Garcia answered with lefts and rights of his own to blunt the rally.

Garcia out-landed Gutierrez 156-116 in total punches and landed 35% of his power punches.

“I never felt like I was hurt badly during the fight, but it was a fair decision,” Gutierrez said. “I started too late in the fight. In the middle of the eighth round, I started to connect on my punches. He moved around my left hand. He’s not an easy fighter, for sure. It's a bad moment for me right now, but it’s just one loss. I’m still young, only 26 years old. I'll wait a little bit to know what I’ll do next, but I’ll rise again. For now, I want to rest and be with my family."