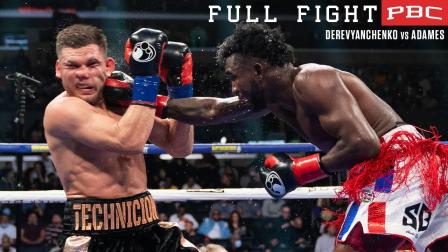 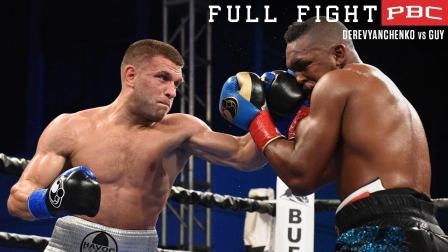 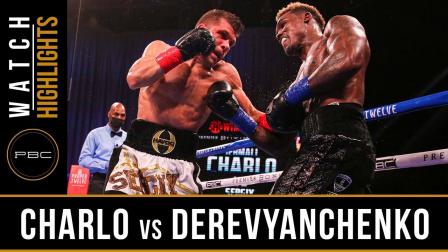 The boxing superstar and five-time world champion fights off a brave challenge to retain his world lightweight title and remain undefeated Sunday night on SHOWTIME pay-per-view.

Hailing from the Ukraine and fighting out of Brooklyn, New York, Sergiy Derevyanchenko has proven time and time again that he is one of the world's best middleweights. The man they call "The Technician" is out for a world title at 160-pounds and is fast closing in on one.

As a youth, Ukrainian Sergiy Derveyanchenko was open to many disciplines, including following his father and former fighter Viacheslav into boxing.

"I was 10 years old when my father brought me to a boxing gym, and he showed me a couple of things before introducing me to my first trainer, Sergiy Korchynskyy,” said Dereyanchenko. “I was young, but I liked fighting right away. I didn’t mind getting hit, but, obviously, I preferred being the guy who did the hitting."

A native of Feodosia, Crimea, Dereyancheko went 390-20 as an amateur, won the gold medal at the European Cadet Championships in 2001 and 2002, earned the bronze at the 2007 World Amateur Boxing Championships, represented Ukraine at the 2008 Olympics, and went 23-1 in the World Series of Boxing, a professional-style competition allowing fighters to maintain amateur eligibility.

"I was successful right away," said Derevyanchenko, who defeated Usyk and Gvozdyk in the amateurs, "even against older boys who had been fighting a lot longer.”

A LATE BUT GREAT START

A 28-year-old Derevyanchenko won his initial three professional bouts of 2014 comprising second- and first-round stoppages of Cromwell Gordon (July) and Raul Munoz (December) which sandwiched a four-round unanimous decision over Laatekwei Hammond (October), the latter during the month of “The Technician’s” 29th birthday.

Dereyanchenko, who moved to Brooklyn to train with Andre Rozier in 2014, stopped three of four opponents in 2015, with TKOs over Vladine Biosse (February), Alan Campa (April) and Jesse Nikow (November) in the second, fourth and third rounds to go along with a eight-round unanimous decision over Elvin Ayala (August).

Campa was knocked out for the first time after entering at 13-1 (9 KOs) as “The Technician” improved 7-0 with five knockouts.

Guy entered at 8-1-1 with four KOs and was stopped for the first time as was Russell, who was 10-0 with eight stoppage victories. Derevyanchenko scored three knockdowns and became only the second man to stop Soliman over the veteran’s 19-year career, and Johnson was knocked out for only the second time, having entered at 20-1 (14 KOs).

Derevyanchenko scored his sixth straight stoppage against Dashon Johnson in March 2018 to set up an October clash with the nearly 6-foot former champion world champion Daniel “Miracle Man” Jacobs, with whom he had shared trainers in Rozier and Gary Stark Sr., the latter of whom worked “The Technician’s” corner and Rozier, Jacobs.

“Of course I always knew there was the potential for Danny and I to fight each other, but not necessarily for the title, and, not so fast,” said Derevyanchenko. “I often imagine myself in the ring with the strongest fighters in my weight during the training process for the opponent whom I will fight. Danny was among them.

Jacobs earned a contentious split-decision at New York’s Madison Square Garden not far from the fighters’ mutual training facility in Brooklyn, this, after having sparred more than 40 rounds with Derevyancheko in advance of the latter’s victory over Russell and Jacobs’ unanimous decision to then-unbeaten Gennady Golovkin in their title unification bout in March 2017.

“It was a bit of an awkward situation to have the corners split like that,” said Derevyancheko. “But I was able to maintain a warm relationship with Danny Jacobs afterward, so I was able to put that behind me.”

Derevyanchenko rebounded from the loss to Jacobs with an April 2019 unanimous decision over former title holder Jack Culcay before losing his last fight in an October 2019 clash for the IBF’s vacant crown by disputed unanimous decision against then ex-champion Golovkin.

Golovkin scored a first-round knockdown in the first round and swept the 12th round on the judges’ scorecards, but Derevyhancheko rocked the eventual winner at times during their clash.

“I thought that I could have done more, but I thought I should have been announced as the winner of the fight against Golovkin,” said Dereyanchenko, who had both Rozier and Starks in his corner against Golovkin.

“I made a few mistakes, but if there’s a rematch between myself and Golovkin, I know what I need to do differently, which is to be more aggressive, and, at some point during the fight, go for the knockout if there is an opportunity to do that.”

“When I beat every one of thoses guys, that would be a tremendous accomplishment,” said Derevyanchenko, 34. “After that, I can decide whether or not I feel I need to rest and retire.”

Derevyanchenko got his wish when he took on Charlo September 26, 2020, on SHOWTIME PPV for Charlo's WBC World Middleweight title. It was a war from the opening bell but, in the end, the champ retained his title, winning a unanimous decision.

On December 5, 2021, Derevyanchenko suffered a second straight loss, this time via 10-round majority decision to Carlos Adames in what was a brilliant Fight of the Year candidate. He would bounce back in July 2022, winning a 10-round unanimous decision over Joshua Conley by scores of 99-91 twice and 98-92